The Monster is Mad 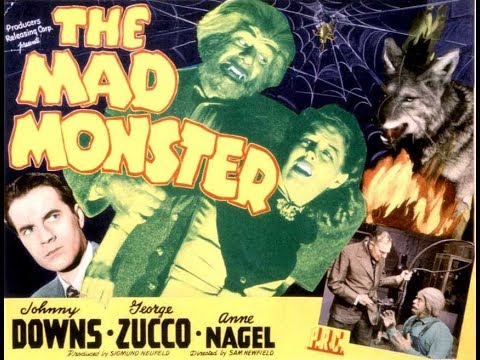 The Mad Monster (1942) looks like exactly what it is: a cheap quickie attempt to cash in on the success of The Wolf Man the previous year. Starring English actor George Zucco as a mad scientist hell bent on eliminating his enemies via innocent Petro (Glenn Strange), his dim witted assistant to whom he has been administering a drug made from the blood of wolves which turns him into, you guessed it, a werewolf. 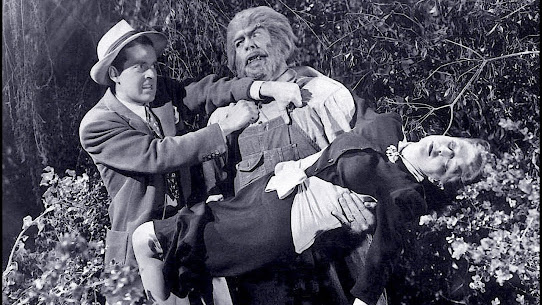 Where this differs from other early werewolf movies is that it functions as a werewolf creation tale. The idea of the werewolf is centuries old and its cinematic depiction normally deals with an ancient curse passed on through injury. But here we have an actual “scientific” origin for our featured werewolf, having been injected with some concoction created form the blood of wolves, an idea not dissimilar to the one introduced but never explored in Wolf Blood – A Tale of the Forest (1925). Well, maybe an origin in the same way Prometheus (2012) is a xenomorph origin. Or not...

Our villain here is not a curse but a mad scientist, George Zucco’s Dr Lorenzo Cameron, who engages in activity that might arouse the interest of H.G. Wells’ Doctor Moreau, but without any desire to test what it means to be human. Here, Dr Cameron is all about creating an army of monster men that he can use as a weapon, his first targets being his fellow scientists who mocked him. Revenge!! Kind of a dress rehearsal for Bela Lugosi’s crazed scientists as featured in some of Edward D. Wood’s later z movies, like Bride of the Atom (1955). Zucco’s tirade against his imagined enemies is fairly amusing. A scene where a young girl is killed has potential but is squandered in subsequent scenes as the bereaved family seems, well, fine.


One of the few redeeming features of this mostly enjoyable cheapie is that it does make Bride of the Atom look good. Strange’s werewolf lumbers around the same 30 odd square foot of forest/swamp, searching around a bit randomly without a hint of animal about him, a few snarls aside, unlike Lon Chaney Jr’s hunched, animal-like gait from the year before. He just looks like a hairy bloke who’s lost And Strange’s make-up really hasn’t much going for it either. Petro wears a pretty rotten wig in his human form as it is, while his lupine form finds itself with some hair glued to the face, false teeth and maybe a bit of a heavier brow. It looks cheap and perhaps sets a standard for cost effectiveness when depicting werewolves. Harry H. Corbett’s werewolf from Carry on Screaming seems to have gotten its cues from here.

Strange’s Petro also ironically seems t channel a different Chaney Jr role, that of Lennie from 1939’s Of Mice and Men, right down to the dungarees. Petro’s shape is that of a hulk, with ridiculously broad shoulders adding to Strange’s already imposing 6’3’’ height. There is a slightly different approach to some of the transformation scenes, where Petro's head slumps down as he falls asleep.One crafty dissolve later and he raises his head to reveal the monster they paid for.

Production value is stretched, the script is flat, shouldering the cast with some abominable lines that sound like they shouldn’t be spoken, and scenes kind of just end. After the glory of a couple of Universal monster movies, the next film was bound to slip, even though Glenn Strange was about to find some success of his own in following in Boris Karloff's oversized footsteps as Frankenstein's monster. But The Mad Monster is mostly rubbish on its own terms.