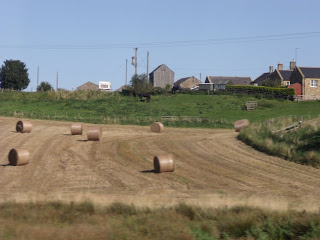 Anyway, looking forward to some time away and then I'll be eager to get back to it once the creatives juices are re-squeezed from the Great Mind Fruit when we return.
Posted by Brian Robinson at 14:57 No comments:

Of Paris and Broken Toes...

For the non-Scots out there, it means playing hooky or slacking off.

Well, from the blog at any rate. As life still goes on in non-blog form. But I'm here to blog again and bore you with more film and writing meanderings.

A little bit to catch up on. There has been a welcome development with the screenplay I was commissioned to write. It has attracted some significant interest here but that's all I can say right now, out of professional courtesy and a desire not to jinx it all by blurting things out and tempting fate. But it's one of those things that reminds you that there is a point to all that slogging at the keyboard in a small room surrounded by copious notes and reference books.

Other opportunities have presented themselves, forcing me to try and get more organised in order to keep the small outboard engine which is the beginning of what I hope is a career running. Unlike the small engine in my lawnmower which kept cutting out a few weeks back, leading my frustration to kick into overdrive, resulting in a broken toe. I'm not so stupid as to kick a metal petrol engine wearing flimsy trainers. It was the hopper, which was full of damp and therefore heavy grass.

Entirely my own fault. A few weeks of limping have led to it healing quicker than expected, but I still won't be near the gym for a few weeks at least.

Also had my first experience of Paris a month ago, with a nice little weekend away with my wife. Fantastic city and the cleanest I've ever been to on mainland Europe - this is not a slur on the other beautiful European cities I've been to, although a trip down the "Beautiful Blue Danube" while in Vienna stands as one of the biggest disappointments I've ever experienced. I recommend folks avoid that when in Vienna - there are much nicer things to see and hear there. But, Paris was just...so clean. I may post some pictures soon. A proper holiday in Malta is lined up next. Hell, my hard working, wonderful wife deserves it, putting up with and supporting this fledgling screenwriter.

In all, not a bad couple of weeks or so. I just have to keep the snowball going down the hill.
Posted by Brian Robinson at 10:44 No comments: