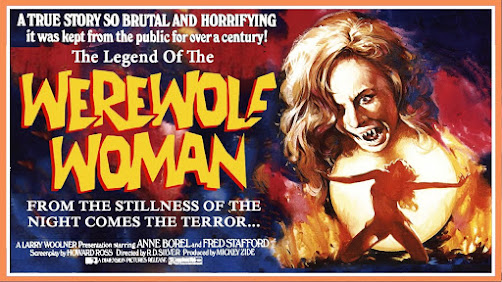 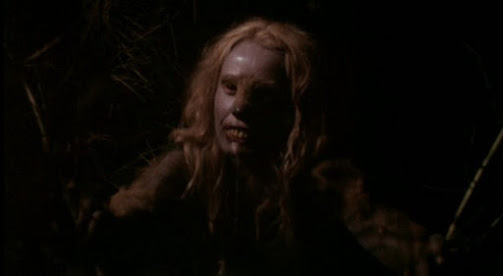 Annik Borel plays Daniella, a woman repelled by sex after being raped when she was younger. This is combined with an obsession about a dead relative to whom she bears a striking resemblance, who was purported to be a werewolf. The film begins with a dream/flashback to the female werewolf, Di Silvestri taking full nasty advantage of the idea of a woman becoming a feral being, complete with full female frontal nudity and even a closer shot of an area normally deemed off-limits in mainstream cinema. She transforms, furry breasts and all and is hunted by the typical mob, killing one of them. Daniella wakes up screaming. Not long after, her sister and her boyfriend turn up, him looking identical to the victim from Daniella’s dream. She spies on them having sex, which pushes her into a crazed attack on the boyfriend later, killing him and blaming it on local dogs. She doesn’t become a werewolf but is always naked when her feral attacks are made, biting and tearing.She soon escapes from a hospital to go on a voyeuristic killing spree. 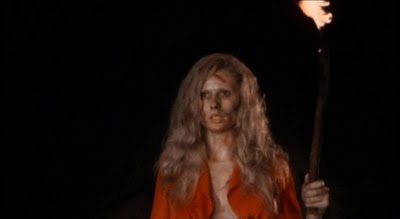 It’s an unpleasant film that seems to treat the trauma of rape as an excuse to have a naked woman brutalise others; when Daniella is hospitalised, every other female patient seems to be a nymphomaniac. She does find peace for a shirt time with a man she falls in love with, but a wholly unnecessary gang rape sequence removes this joy from her life, resulting in a hasty revenge sequence. The scenes of violence against her would be more difficult to watch of they weren’t to incompetently filmed. 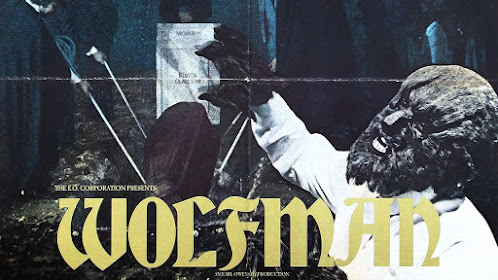 Wolfman (1979) was a vehicle to showcase the acting talents of producer Earl Owensby and, on that front, it certainly showcases…well, something. Owensby made films that went to the drive-ins of the 70s, mostly very cheap with actors who possess little to no experience. I did see one of his later films rented on VHS when I was a kid, Gremloids (1984), a cheap attempt at a Star Wars parody, whose only real virtue was giving us Lord Buckethead, who has become a staple of the UK election cycle. 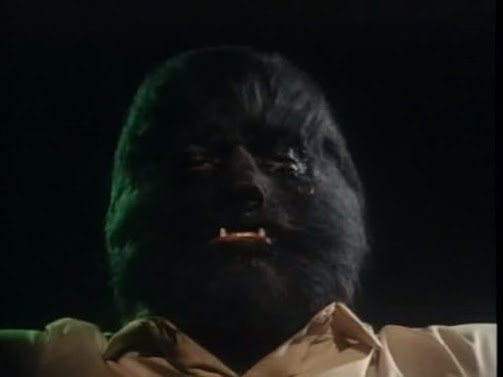 Owensby plays Colin Glasgow, who has come home to attend the funeral of his father, who we already know has been murdered by Colin’s cousins and a minister who also all happen to be Satanists. Seems there is a werewolf curse they want to pass on to Colin, for reasons we are never truly told. The curse is passed on to Colin and deaths ensue. It’s all meant to take place in the 1910s (?) and attempts a Gothic horror feel, which never feels authentic in any way. This is really cheaply made stuff, shot either on location or in a cheap studio with concrete floors (some high angles give them away, where floorboards should clearly be); no one sounds like they're in the corridors we're meant to believe they are. No work for Foley artists here, it seems. Most, if not all, of the actors are not professional – this should never be a flat reason for dismissal, but just about everyone here is awful. Extras and some victims in the torch wielding mob look like they’ve not even bothered to dress for the period, and bits of set wobble. Owensby’s werewolf is your typical hairy-faced, black snouted wolfman, with dissolve transformations taking just 3 shots, the middle of which he just looks like an ape-man. Owensby’s own central performance is dismal to the point of incredulity. He simple cannot act and his southern drawl is at odds with the location and tone he’s looking to achieve, coming off like Lee Majors after a severe head injury. 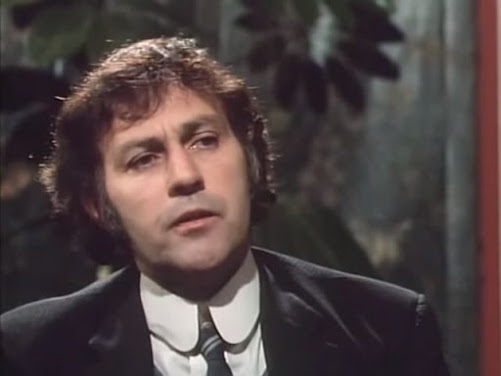 This is really only about one step above Troll 2 (1990) territory, but nowhere near as much fun. A cheap, shoddy vanity project, but I suspect it made money due to Owensby’s production methods, similar to Roger Corman, except Corman would employ talented people.

Damn, I hate ragging on films, but these were just awful.