I found House of Frankenstein (1944) to be a bit of a delight. I was cautious after previously only lasting around 10 minutes when watching House of Dracula (1945) a few years ago. Some of my students are fanatical about the current shared Marvel Cinematic Universe - I had great fun and some real nostalgic kicks myself when I saw superheroes from my childhood together in Marvel’s Avengers back in 2012 – and so they have a bit of an awakening when I tell them that it was Universal Pitcures who came up with the idea of a shared universe on film 70 years earlier. House of Frankenstein was to horror icons what Thanos’ hunt for Infinity Stones is to superhero movies. And what brings this film to my werewolf list is the presence of one Lawrence Talbot. The events of Frankenstein Meets the Wolf Man (1943) are directly referenced here, making this a direct sequel to that the the previous Wolf Man (1941) and this pretty much a set of movies all connected by the life and fate of Chaney's Wolf Man.


Director Earl C. Kenton keeps things moving along nicely, with some engaging direction. Karloff’s own entrance is great, as his arm whips from a prison cell to strangle his jailor. There is a lot of fun to be had here and Kenton knows exactly which world we’re in. There's a great stunt moment where J. Carrol Naish's hunchback falls beneath some loose rocks in a cave, mid-dialogue and wonderfully timed, well into the shot. And of course there's some juicy, fun dialogue through the proceedings as well. 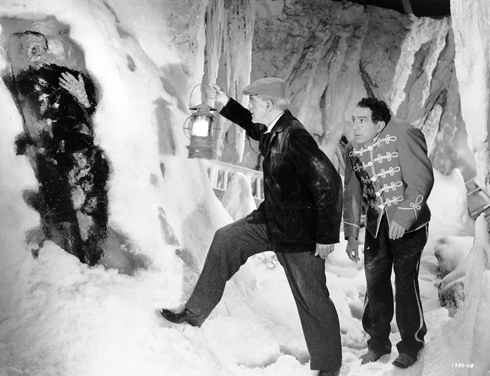 Yes, it’s immensely silly and the part with Dracula seems tacked on to the beginning as he seems to be there to simply get the mob off the tail of Boris Karloff’s splendid Dr Niemann and his sympathetic hunchback assistant, Daniel (J. Carrol Naish). The entire sequence featuring Dracula and his intended victim is interesting but seems like a separate little film of its own, and once the Count is dispatched the other relevant characters, including Universal Horror stalwart Lionel Atwill, are never seen again. I never bought John Carradine as Count Dracula. Maybe it’s the ‘tache. Or the top hat. Or he just doesn;t suit the role? There are some decent shots of his shadow transforming into a bat; it appears this iteration of the Count prefers to use his bat form to feed on the less attractive male characters, like the true vampire bat. 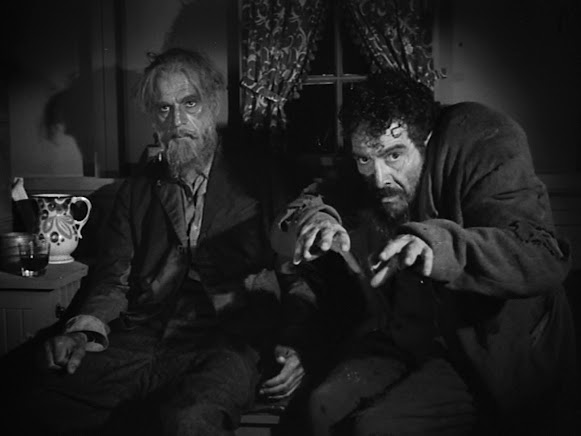 The evil Dr Neiman seeks to recover the records of the late Dr Frankenstein so he might continue and improve on his work on resurrecting the dead. Or more like a chain reaction of brain transplants – it does get a little bit difficult to remember which brain is going into what body later o in the film, to the irritation of Lon Chaney Jr’s recently defrosted Lawrence Talbot, found alongside the also frozen Frankenstein Monster, this time played by the giant Glenn Strange, who we recently watched in The Mad Monster (1942). I’d spent many years being a bit cynical about Strange as the monster but he does well, certainly better than Lugosi (as of this writing, I am still to see Chaney’s take on the character), evoking more empathy for the Monster than anyone since Karloff. They may have dropped in one or two of Karloff’s snarls from the first two James Whale films. Another cast member from that Poverty Row effort is George Zucco, here playing Professor Lamprini. Or he does for a short scene before Karloff does away with him and assumes his identity. The entire opening sequence of the film does give us some characters which seem to be cast aside early on. 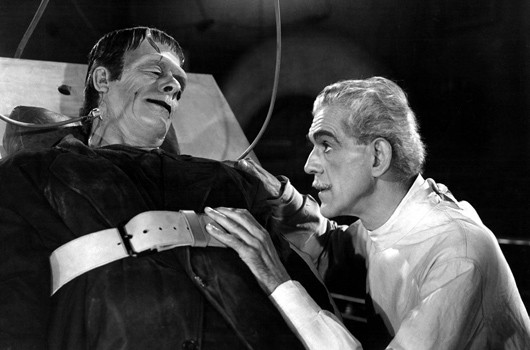 And so, we once again encounter Lawrence Talbot and his impatient desire to die and be free of his curse. His pleas are met with broken promises by Karloff’s mad scientist, while the hunchback Daniel’s gypsy* travelling companion, Ilonka (Elena Verdugo) falls for the tall and tragic “Larry”. Jealousy ensues, with Daniel now developing a hatred of Talbot and the Frankenstein Monster as Neiman’s promise to fix his physical deformity have been cast asunder in favour of darker experiments. A neat little moment where Daniel takes his temper out on the Monster brings back memories of Dwight Frye’s original hunchback assistant, Fritz, torturing Karloff’s Monster in the original Frankenstein (1931). But here, instead of blind hate, there is some understanding of where his violence comes from. 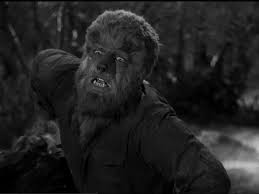 We have an interesting and different take on Talbot’s transformation into the Wolf Man, as we follow his footprints change from human to werewolf in the mud as he takes off into the night. Another full-face transformation is also terrific, with Jack Pierce’s make up looking even better.

Of course, it all ends in tears, as lovers destroy each other and Daniel is tossed from a window like a ragdoll by the Monster, before the mob chase him down as he carries the wounded Neiman off into the woods, only to be swallowed up by quicksand. Cue credits. A top time has been had. It;s a bit strange how thes emovies often have no coda. Monsters are despatched and then it's immediately all over.

This has also encouraged me to try watching House of Dracula again. Let's see what happens…

*Any uses of the word “gypsy” by me in these blog entries are not intended to be offensive but reflect the simple-minded portrayal of Romani culture of the time and tone of the films.