Another little bit of my childhood passed into eternity tonight. 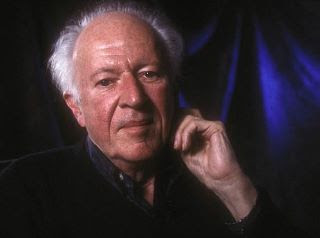 Ralph McQuarrie started out as an industrial graphic designer. His work for NASA around the moon landings caught the attention of filmmakers but it was one in particular who really let McQuarrie's imagination loose on all of our eyes; yep, that fella again, George Lucas.

In an effort to try and raise funding for his embryonic project, The Star Wars (as it was known at that time), Lucas employed the awesome talents of McQuarrie to try and convey his proposed film in visual terms. McQuarrie was tasked with creating quality paintings that encapsulated specific scenes from what was (I believe) merely an outline and a series of ideas that Lucas had at the time. While his work for NASA showed his talent for designing believable space craft, his work on Star Wars also showed  a flair for character design, be it human, alien or droid. Many of these images persevered and survive in culturally iconic form in the finished film as we still know it today. Such was McQuarrie's talent. And he helped keep Star Wars alive visually, being a major contributor to Coruscant in the Shadows of the Empire project, something that carried over into the prequels.

Or to put it another way, he pretty much designed Darth Vader. No mean feat. 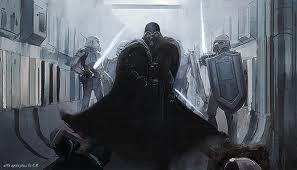 McQuarrie went on to design further aspects of Star Wars and did the same for The Empire Strikes Back and Return of the Jedi and contributed to the Indiana Jones films and other movies and his work is even felt in its influence of designers such as Doug Chiang and Ian Gracie in the newer Star Wars films. 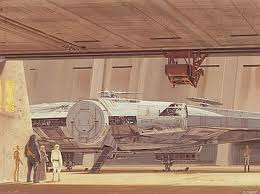 In a time when we lose guys like Ralph and Bob Anderson (the sword master from the original trilogy - when we saw Vader duel, it was mostly Bob) I feel that little bit older. Ralph was 82 but this still feels like a bit of a gut punch to this geek. 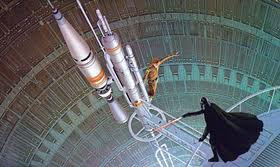 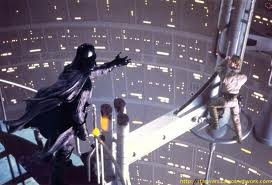 Thank you, Mr McQuarrie. Word has it you were a kind, self effacing gentleman. Thanks for all the wonderful sights you filled my life with.
Posted by Brian Robinson at 02:53 No comments:

Of Tinned Tomatoes and Oscars.

In the summer of 1984, the BBC was broadcasting the summer Olympics from Los Angeles, mostly late at night due to the time difference. It seemed a pretty big deal at the time and ITV, in an effort to counter this in the ratings, began broadcasting a mini series from the US that appeared to have done well; V, a tale of alien invasion and a tribute to resistance fighters and those who stand up against fascist oppression, but done with laser guns and spaceships. Disregarding any thought of the recent limp remake, I loved it. As an 11 year old who was allowed to stay up late to watch this sci-fi show, I appreciated it and lapped it up. The alien invaders were known as the Visitors who, while they appeared benevolent and looked human thanks to rubber skin, were actually reptiles bent on world domination, water theft and human rotisserie. And as I recall, there was a particular scene where one of the aliens Visitors, Willie (played by a sympathetic Robert England)  is brought before some youngsters by human resistance fighters in an effort to show them who they really are and has the fake skin ripped from the back of his hand, revealing scaly reptile skin underneath. It was a great moment and one we would talk about at school for a while.

The next morning a friend was coming over to hang out, it being the summer holidays. This friend also loved movie make up, especially the old Universal monsters and the work of guys like Jack Pierce and Dick Smith, and would try out experiments on himself with putty, yak hair and greasepaint. This particular morning the doorbells rings and I go to get it, expecting my friend and rightfully so. There he was. And with a simple "Hello", he raised his arm and proceeded to tear the skin from the back of his forearm, revealing green, scaly reptile flesh underneath; perhaps I should reiterate that we were both 11 at the time. And I think my immediate reaction was pretty much, "Wow". This was just part of an ongoing passion my friend had with special effects make up and it got better as we progressed through school, making films where fake severed limbs, ripped eyes and washing up liquid bottles full of tinned tomatoes were sprayed at walls and faces were a relatively regular occurrence.

Some people leave that kind of thing behind when they leave school and enter the world of grown ups. And some people don't. Nor should they ever.

And so, sitting next to a good friend when they find out that something they worked on in a rather major way has just won an Academy Award is a pretty good feeling.

Taken a few days to write this, but I figured, what the hell. Congratulations to Mark Coulier, Stephen Murphy (said friend) Barrie Gower and everyone else who contributed to the make up for The Iron Lady.
Posted by Brian Robinson at 09:55 2 comments: