Blimey. I managed three of the buggers in a row today. All from the 1950s. 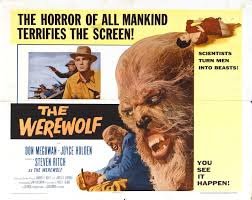 Leaving behind the classic monsters of the 1930s and 40s, linear time and all that guff dictates that we move on to the 1950s. There had been a gap of around 8 years by the time anyone in the US seemed to think of making another werewolf film and times had changed. The age of the A Bomb and fear of the Red Menace had moved fantasy filmmaking into the era of classic science fiction, and monsters still ruled the roost. But they weren’t all to be the inhabitants of flying saucers; 1956 saw the return of the werewolf in the wonderfully titled The Werewolf. It tells the tale of an apparent amnesiac who wanders into a typical small town in the mountains (the wiki page for this film is rather overly preoccupied with nailing down the actual locations) and gets mugged, only to turn into a werewolf and then do what it is that werewolves tend to do best. The locals gather round and re-enact a scene we know only too well, with dialogue we know only too well; “His throat’s been ripped out. Only an animal could do this sort of thing. But what kind of an animal?” Or words to that effect. 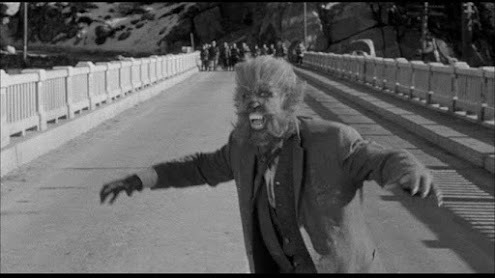 But this werewolf doesn’t rely on any curse of moonlight as the poor sod is the survivor of a car crash who has been treated/experimented on by a doctor who believes that the human mutations caused by the coming nuclear bombs can only be combated by creating human/animal hybrids. So far, so The Mad Monster. But his patient escapes, so he and his dimmer colleague set out to kill him before anyone finds him, like a torch wielding mob…er, sorry, a bunch of sheriffs and local hunters. There is definitely more of an air of science fiction about this, rather than the pure horror of most previous entries into the sub-genre, with our monsters and mad doctors given new motivations while maintaining the werewolf’s victim status, a ’la Lawrence Talbot. It’s not wonderful and the make up on the werewolf stretched mostly to hair and greasepaint, with a shiny black nose painted on. And the dissolves during the transformations are pretty poor, with the actor’s eyes and mouth shifting positions significantly, matching not very much. But the monster was back. 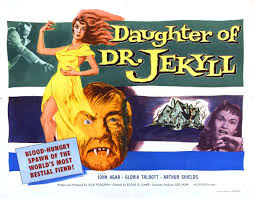 The following year saw the returning monster return to a period piece with Edgar G. Ulmer’s Daughter of Dr, Jekyll (1957). A clearly low budget creates limitations, but Ulmer’s direction tries to make the most of what is a pretty terrible script, with some interesting dream sequences. Our lead, Janet Smith (Gloria Talbot) and her fiancé, George, arrive at Janet’s ancestral home, greeted by the doctor resident there, a cheerful Arthur Shields as Dr Lomas, who gives Janet the good news that she is about to inherit the house and a fortune. Unfortunately, she is also about to he told that she is the daughter of one Dr Henry Jekyll, and that she may also have inherited his madness. Oh, and Mr Hyde was a werewolf… 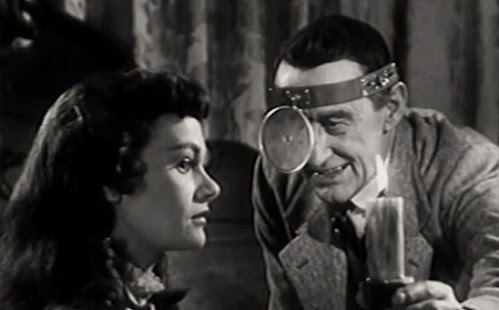 What the hell is going on here? Since when was Hyde a werewolf? And since when did a wooden stake kill a werewolf? And since when did werewolves lie in their coffins all day, looking as young as they day they became werewolves thanks to the blood they drink? All part of the confused guff this script adds to the mix. The word vampire is never mentioned. But Janet is becoming convinced somehow that she is also a werewolf, and it doesn’t take long to realise who the real culprit is and that this could also be construed as a remake of She Wolf of London. Except with an actual werewolf. 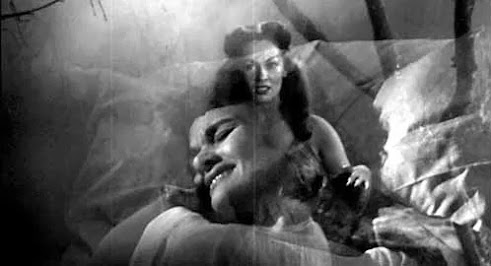 The werewolf make-up is sparse – drawing hair on hands with greasepaint is and unusual approach. The beast is featured in the opening and closing moments of the film, breaking the fourth wall in a ridiculous manner, so there’s not a huge amount of anticipation. A detailed but horrendously filmed miniature of the grand house gets some serious mileage and you can even see passing traffic in the window of the house at some points. Ulmer tries, but the limitations here get the better of everyone. 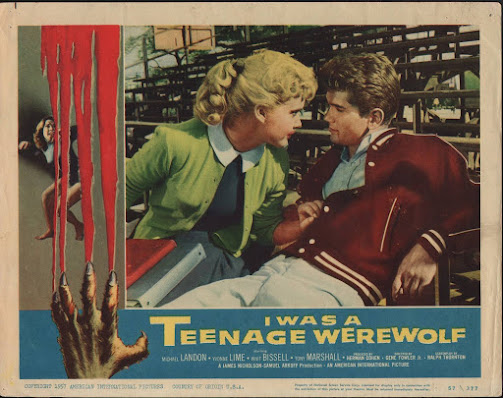 Growing up in the 1970s and 1980s, Michael Landon was either Little Joe from the never-ending 60s Western TV show, Bonanza, or he was Pa Ingalls on Little House on the Prairie, all big hair and good advice. I guess he was the latter for me as I remember my dad loving that show on a Sunday morning. So, I was surprised in my early teens to discover that Landon was also a teenaged werewolf in the coincidentally entitled B movie, I Was A Teenage Werewolf (1957). Here, he’s troubled young lad Tony, who has some serious anger issues that wind him up in the office of the respected but also completely mad Doctor Brandon (Whit Bissell). Dr Brandon sees an opportunity in Tony’s nature to conduct a secret experiment that will revert Tony to a feral form – another mad scientist who wants to alter humanity to whatever reason, like The Werewolf (1956). Why Tony reverts to a canine form instead of an ape is really not worth following up. I felt sorry for his widowed father more than anyone else. The film seems to think that single parent homes result in terrible behaviour, with the ideal of the nuclear family being seen as more wholesome in the 50s. 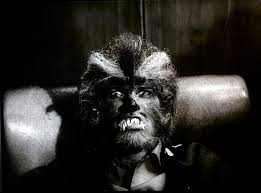 The 50s brought a lot of new fears, not just of communism and atomic war, but of teenagers, and here that fear is not only on display for exploitation, but it succeeded in appealing to the very people it was demonising – teenaged moviegoers. James Dean never had it like this. And definitely never slavered like the angry lad on show here.They overdo it on that particular front. 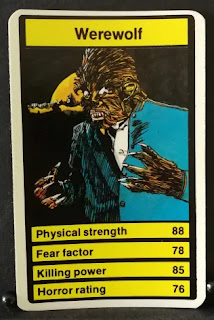 Another thing about growing up in the 80s was the card game, Top Trumps. The horror version was really popular, and its version of the werewolf was indeed a depiction of Michael Landon’s hairy troublemaker. It sat alongside a T-Rex from the Land That Time Forgot with a suit and bow tie as a hilariously wrong Godzilla, so it was more of the visually accurate cards. Seriously, WTF was up what that? 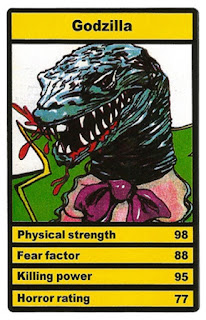