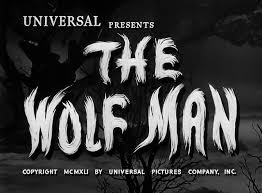 Spoilers follow, as they likely will for all entries in this run of blogs.

Well, if you're watching werewolf movies for a month (what have I done?), you can’t go wrong with The Wolf Man (1941), directed by George Waggner and written by Curt Siodmak. One of the old titans of werewolf films, it still has some power where many of my own generation can only mention American Werewolves in English cities.And I still love this film. 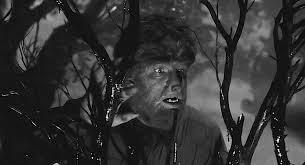 It’s only been a few years since I last watched it and yet I saw more this time. Particularly, Lon Chaney’s tragic Lawrence Talbot is introduced to us as a peeping tom. His casually mentioned (and never again mentioned) expertise working with optics leads him to help set up his father’s telescope in their stately home which the producers seemed to think looked like what they thought might be a castle. No sooner is dad out of the scene than old Larry is scanning the quant “English” village (more on that later) and settles on the bedroom of sort-of-love interest Gwen Conliffe (Evelyn Ankers). He pursues her with some cryptic questioning that made me slightly shudder. No wonder she said no. but Larry’s no quitter, even though Gwen is engaged to Patric Knowles’ solid, dependable Frank. 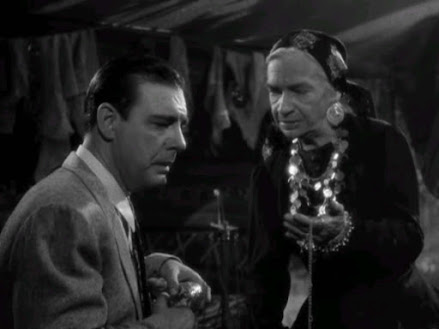 We should all know how this goes, as Larry & co go for an evening walk and come across Maria Ouspenskaya and Bela Lugosi’s gypsy caravan and try to get their fortunes told. But with Bela being a werewolf and all, well, one werewolf attack later, Larry has been bitten by Bela (playing a man called Bela) and the curse has jumped bodies once again. Larry is consumed with guilt at killing Bela and this guilt comes to define the character in this and his subsequent cinematic appearances. The body count is remarkably low, however, until the end where Claude Rains’ father figure intervenes and bashes in his spawn with his own walking stick. It should be noted that Maria Ouspenskaya is fantastic every time I see this film, bringing some grounded emotion and dignity among the pained tragedy and phoney non-English accents. Virtually none of the leading men, dressed in very US cut suits, attempt anything resembling a UK accent, and that’s maybe for the best. 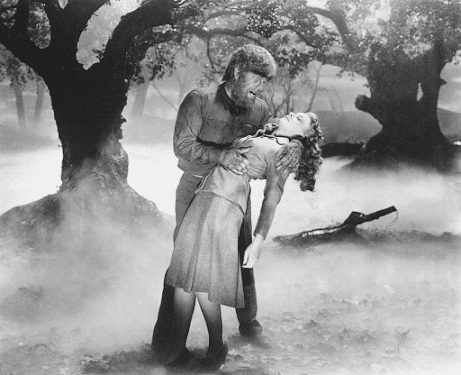 Chaney’s performance ranges from cocky scion to tragic child – there are times when a kind of boyish innocence comes across, even though Chaney was a big man. That’s something that always came to mind – for his size as a human performer, I always thought his Wolf Man seemed smaller, and not just because he crouched to achieve something like a more animalistic gait; he just appeared to be a smaller man under Jack Pierce’s stunning make up. But in Chaney's first transformation scene, he takes his white shirt of as he starts to transform, only to be somehow wearing a buttoned up dark shirt when on the canine prowl. Did the Wolf Man stop to get dressed before jumping out the window? I was curious as to why for both transformation scenes, we never see his face turn wolfish, only his feet, whereas the previous Werewolf of London not only gace us the generally recognised dissolve technique on the face, but also tried so,mething different by having a transforming Henry Hull walks past beams or dark objects in the screen, each hiding a cut where more make up was applied. But, as we'll see, the later Frankenstein Meets the Wolf Man remedied that. 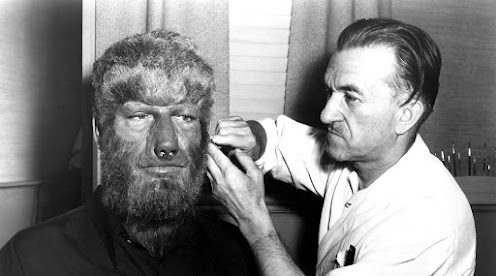 The images of the Wolf Man snarling his way through misty woods are well known but the scenes in the old English village where much of the action takes place are just distracting from a UK viewer’s POV. It’s clearly the same Universal backlot where previous Frankenstein films were shot, with a generic but also semi-gothic north European look to the architecture. In short, it all looks about as English as a kilt. But, it’s part of the Universal charm, I guess.

I was saddened to discover what happened to Pierce after Universal let him go -  an act of the most short-sighted ignorance. Overtaken by the merciless Westmores (a name I come to dislike the more I read about them), he moved on to TV and B features and died largely forgotten and poor in the late 60s. His relationship with Boris Karloff seemed very warm and a clip I saw form an old episode of This Is Your Life featuring Karloff showed two old friends are reunited in a wonderful moment where Pierce came on to greet his old victim of the make-up chair.

Next up is Poverty Row production, The Mad Monster (1942), which has kind of a Doctor Moreau thing going on.