Self Portrait of a Mug. 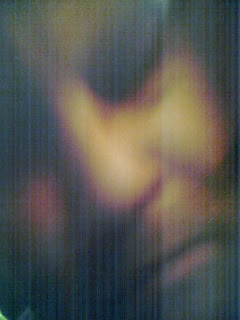 Cameras in mobile phones can be great sometimes, especially if you shake 'em as you're taking the picture Pulling stupid faces helps a lot as well.

I've got a few of these and will post more soon.
Posted by Brian Robinson at 15:15 No comments: 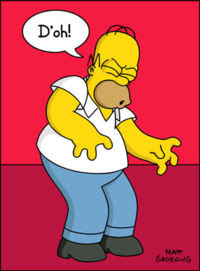 I am known for arsing things up and generally getting it wrong.

In my last post I mentioned this as being the final week for the Digicult Digital Shorts 09 scheme. Got that wrong - that would be late November for that.

Another deadline I am chasing is for the BBC Radio comedy sketch show, Recorded for Training Purposes. They are asking for up to three sketches due by the 17th November. I've got a few I might sling their way after a clean up.

I finished a big bit of work I've been doing lately the other day - a revision of my first bit of paid work, a feature screenplay. Sent it off to the chap who commissioned me and waiting to hear an opinion. A good opinion means we try and take it to the next stage, so I get my last bit of pay. And boy, do I need paid right now. About 45p in my pocket and that's about it for me fiscally. Ah, so this is the life of the writer. No money. Not much change for me there then. What we do next with the script may be up to me as well, so I need to try and get this into proper development. I'll keep the blog posted as far as that goes as much as I can. There may be things I won't be able to mention but I'll have to wait and see. An opinion asking for improvement means another revision and an extended period of Emptiwalleitis.

So, while I wait I'm taking a week to myself. But am I? Now this piece of commissioned work is out of my hands for the moment, I'm still itching to get into my spec stuff. I have a couple of feature outlines I want to work on, several short outlines, a short story I'm writing for an online competition (not a big competition but one run by a forum I post on) and this week is the final week to get an entry in to this year's Digicult scheme, so I need to see what I've got and polish and prepare as need be. And there is the floor plinth in the kitchen I need to fix and have been putting off for ages now. But I also need some fecking time off!!

So, this week is kind of my own. But I'll be watching lots of films as well, both for fun and research. The two feature outlines are Horrors but both very different tonally. I got a Hammer Horror box set last Christmas and have been waiting to get stuck into it, along with a lot more horror movies on DVD.

All the while scribbling down any ideas that smash into my attention span.

Excuse me while I fetch a cup of tea, sink into the recliner and hit PLAY.

(How I stay away from the Wii is anyone's guess...)
Posted by Brian Robinson at 12:26 No comments:

Got bored. Did a doodle. 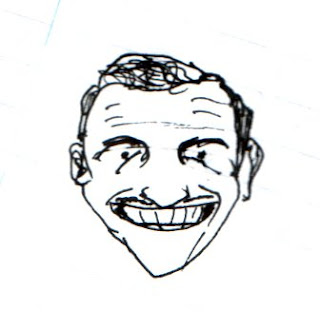 Charges in movies. Sometimes they can be moments of utter wonder. The attack on Aqaba in Lawrence of Arabia immediately springs to mind. The Battle of Stirling in Braveheart is another.

But one thing that particular scene has which seems to have become a requirement in modern movies is Wallace's "pep talk" to his men before they charge ( also, the real battle was over a bridge and the real Wallace drowned most of his enemy that time, but Braveheart is so full of historical liabilities it's futile to try and set it all straight). Those lines have now morphed into cliche, which is not surprising given the unsubtle nature of that script. Every time I see what looks to be a similar scene in an attempt at a modern epic, I start to hunch up, fearing the cheese approaching. I might as well stick a clothes peg on my nose. This is something I have been trying to avoid myself in my present project, which is a historical piece with battles, but no cavalry saving the day - just one desperate guy.

One moment I feared this was in The Return of the King, which features what I think is one of the best siege sequences on film. Theoden King of Rohan musters his Rohirrim riders as the city of Gondor is about to fall, overrun with orcs and genuinely brutal trolls, flinging people into walls. No nasty rhymes, turning to stone or cheesy fights - these fuckers will smash you to pieces. And there is what could be construed as Theoden's own pep talk.

But, unlike Aragorn later on at the Black Gates (where he does go a bit Wallace, but understandably as the odds are piled against them) Bernard Hill does not mess about. This is Yosser we're talking about now.

Whereas Wallace had the battle cry of "Freedom!", summing up the bleedin' obvious theme of the film, Theoden has a slightly different one. Far more to the point but screaming a bit less about any obvious theme.

And the men all shout it back. Over and over. Intent made clear - these grotty orcs are about to die en masse. And then they charge, slowly at first, the music rising as the horses gather momentum. Breaking through the front line of orcs. And the look on the face of the chief orc as he realises they're buggered.

This is how you lead a charge.

Dammit, if this just doesn't make the hairs on the back of my arm stand up. Can bring tears to my eyes as well. My favourite cavalry charge scene in any movie and probably my favourite scene in all three Lord of the Rings film (the Moria sequence comes close). Put them at their darkest hour before they are saved - good screenwriting.

This is Theoden's second time leading a charge, after heading to what he thinks is certain death in The Two Towers, before he himself is saved by the cavalry. Again, he only has one battle cry and no convoluted pep talk - "Forth Eorlingas!". It does mean something in Tolkien's lore, but what matters is the obvious sentiment, made even clearer on the Pellenor Fields in The Return of the King.

One of those moments I live for in movies.

If only Yosser had led a charge like that outside the DHSS in The Boys From the Black Stuff.
Posted by Brian Robinson at 11:21 No comments:

A Bit More of a Rubbery Cox

After my Total Recall blog, I trawled around a bit for clips and I feel this would have been a far better clip to illustrate my point about Ronny Cox's wonderful demise.

Be warned this is a bit gory and rubbery and is about twice as long as it needs to be.

But it's also one of the most surreal and frankly hilarious things I've seen in a long time. Yes, I could be a bit sick. 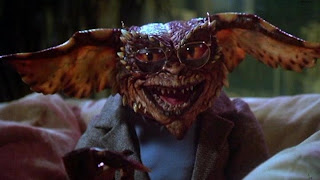 The little things in life. They can make-a-da world go 'round. Every day is made up of tiny little moments that move us forward. Or not, as the case may be. Sometimes we move forward despite some of the other little things. Sometimes they cause mayhem with our progress, either irritating us when we should know better and sometimes preventing us from proceeding catastrophically. As is usual with me, it's the former. One of those things I ought not to get annoyed about and keep reminding myself that a calm mind can win the day whereas shouting at inanimate objects only raises blood pressure, harms the voice, scares the dogs and bewilders the neighbours.

Like a particularly persistent little bugbear which is rearing it's head as I finish my a revision of my present writing project. I suppose you could call this a personal gremlin.

As I'm typing up my screenplay, heading towards that first finish line (for there shall be many more with this script, hopefully), every time I type the word "look" I look up and see that I have typed the word (or non-word) "lok" instead (I actually just did writing that sentence!). No matter how mindful I try to be about making sure I hit that "L" button twice, it always happens. An irritant and one that can be dealt with without getting that annoyed (I tell myself). Yes, your friendly, neighbourhood spell-checker deals with these things as swiftly as an edit in a Michael Bay film.

Yes, modern technology is wonderful, but still has to contend with the non-logistics of human nature. You see, another manifestation of this personal gremlin is the word "from". Or is that "form"? Because that's what I seem to type all of the time when I mean "from". And you friendly neighbourhood spell-checker has no trouble with this either. Which is what gives me trouble. Because this persistent irritance is not a non-word, like "lok". It is indeed a word, with it's own meanings which can change a sentence. And my script writing software has now grammar checker (that I can see anyway) Yes, I know of the value of proof reading one's own work but dammit, do I have to proof read as I type? It's just that it happens so bloody often.

So, now is the time to remind myself that this is an example of one of those little things which I ought to know better about. A personal gremlin that can be flung out into the daylight to melt in a puddle of green goo by merely calming down and dealing with the little things which constitute the day.

And that concludes our Vent for the Day.
Posted by Brian Robinson at 19:02 No comments: 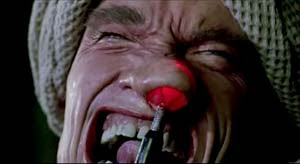