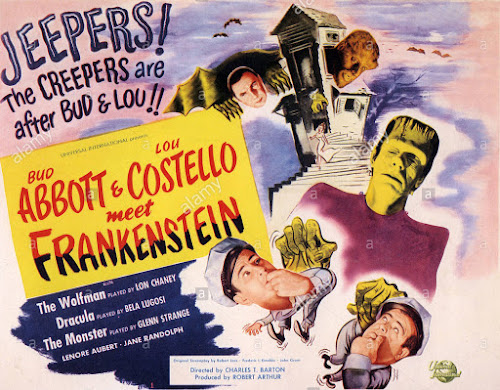 The last hurrah of the Universal monsters took a big risk in going for laughs with Abbott & Costello Meet Frankenstein (1948) but, somehow, it works. Some weird alchemy was at work here, in what could have been a total embarrassment for Universal’s gallery of horrors. House of Dracula (1945) had left things in a precarious position, with everything looking well past its sell by date to me, and to end things on that note would have been a shame; which does make me wonder about the decision to have the Wolf Man, Dracula and Frankenstein’s Monster support arguably the biggest comedy duo in US cinema at that time. Would they simply be there to provide laughs and be mocked? What audiences got was a pretty well-judged balance between comedy and horror, with our favourite ghouls played straight while the humour largely came from Bud and Lou’s reactions as well as their usual interactions.

Bud and Lou play Chick Young (a name which should amuse Scottish Football fans of a certain age) and Wilbur Gray, respectively, who work in a parcel office. They receive two large boxes, to be delivered to the unreasonably antagonistic Mr McDougall. Seriously, this guy shouts from the outset, slapping Lou around and demanding they both be jailed for losing the contents of his boxes. Boxes, we learn, which contain Frankenstein’s Monster (Glenn Strange) and Count Dracula himself. Gone is the thin faced, totally wrong John Carradine and returning is the original Count himself, Bela Lugosi. It’s well known that Lugosi’s final years were marked by appearances in very poor z-grade horror films and I feared that he might have been doing himself a disservice appearing here, but he’s great. He knows who the stars really are and plays it all straight and with aplomb. Of course, this is nowhere near like his original appearance as Dracula, but he reaffirms his decades-long identification with the role. Strange gets a bit more to do here at the end and even gets some lines, lumbering around after our heroes. 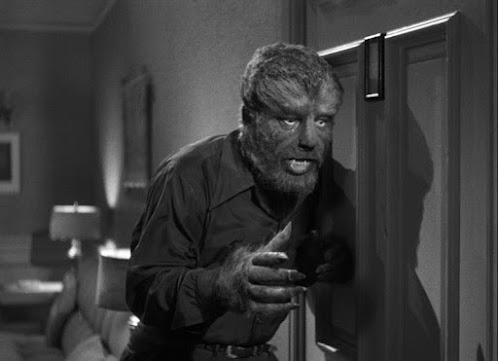 Lon Chaney. Jr joins in the fun as Lawrence Talbot, this time featuring make-up from Bud Westmore, which really looks like a poorer man’s version of Jack Pierce’s original design. While Pierce liked to build up layers of make-up, I’ve read that Westmore was keener on larger appliances, which just look a bit stuck on. A scene in Talbot’s apartment where he stalks an unsuspecting Wilbur does have more of an element of scariness than they previous couple of films in the series, but of course we know Abbott & Costello aren’t about to get their throats ripped out. The Wolf-Man and Dracula get an expensive exit as they plummet into the sea, with what looks like an early matte effect folloed by an animated splash. The Count’s own animated transitions into a bat also look far better than Carradine’s, with the animation looking far slicker. Seems more money was spent on this one that the previous Universal monster movies. 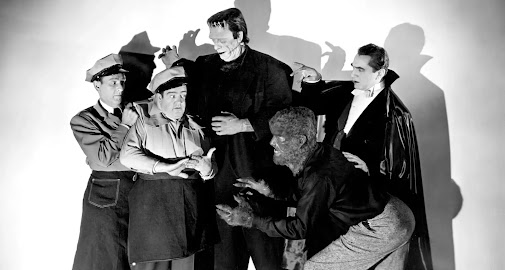 Regarded as one of the greatest horror comedies ever made, it made me laugh a fair bit and a surprise “appearance” from another Universal horror character in the closing seconds of the film came as a pleasant surprise, voiced by another horror icon (no spoilers). It's not meant to be taken that seriously, but the serious approach to the monsters among the comedy lifts up what could have been an ignominious end for them. It was the end for this Holy Trinity of the Wolf Man, Dracula and Frankenstein appearing together like this, but Bud and Lou would go on to meet more of Universal's other monsters. But, since this is a werewolf thing I'm doing, those will have to wait.