Writers and The Blackness

There is a great article over at TwelvePoint.com regarding depression and being a writer by Dominic Carver. If any writers visiting this blog have ever suffered from this particular brand of mind and personality rot (like myself) then I recommend reading his piece.

Registration may be required but TwelvePoint.com is an invaluable resource which I recommend any writer check out, so I think registration will be worth your while.
Posted by Brian Robinson at 11:37 No comments: 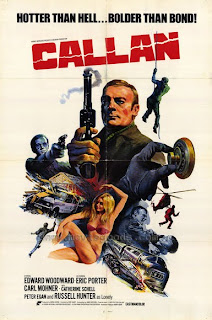 It seems the easy thing to do would be to mention The Equalizer or The Wicker Man (which I intend to watch tonight).

But, before Jack Regan and George Carter, before Gene Hunt, before Bodie & Doyle, there was Callan.

And he'd have kicked their collective arses.

RIP Edward Woodward. A true gent by all accounts.
Posted by Brian Robinson at 22:26 No comments: 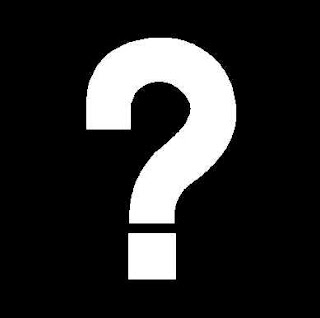 As the good Mr David Bishop says, Onwards.
Posted by Brian Robinson at 18:16 No comments: 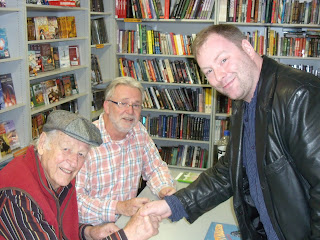 The Master Ray Harryhausen, co-author Tony Dalton and this fat fool of a blogger. I take a rotten picture.
The very first film I ever saw in a cinema was The Seventh Voyage of Sinbad (not Star Wars as some folks think). It was part of a double bill (playing alongside Chuck Jones' Bugs Bunny/Road Runner Movie) my dad took me to when I was about 6 years old. I'd been wanting to go to the cinema for a few years by that point, but my disappointment as not seeing Star Wars when I was 4 is the point of an older blog post.

So, my earliest memories of the movies are of a giant Cyclops, a dragon, a tiny princess, a poisoned river and Torin Thatcher fleeing and crying for help from the outset. And it was the monsters which had the biggest effect on me. I was hooked on the buggers. This from a kid who hid at the side of the TV when Doctor Who or Space 1999 came on. Not to take anything away from its director, Nathan Juran, but it was really all about the animation master and pioneer Ray Harryhausen for me. I knew who this guy was before I knew who the Maggie Thatcher was.

I got to know his style early on and was usually disappointed when a monster movie appeared on TV that did not have his name attached. In fact, a small rage would grow in me when it became clear that I was watching iguanas and baby crocodiles with plastic frills on (The Lost World and Journey to the Center of the Earth were particular offenders to me as a kid). If it wasn't Harryhausen, my interest would wane.

And I got the chance to tell the great man about my first cinema experience face to face recently when I met him at a book signing. It was over so quickly (bloody queues) but will remain in my mind for as long as my mind works. It was good to have a chance to thank the man and shake his hand. How often do we get to meet our heroes and thank them? There is the old saying that one should never meet one's heroes as they will disappoint but sometimes the meeting is so brief that the chance for disappointment doesn't get a look in. Maybe that's the way to do it. It was likely just another fan for him but it was a big moment for me.

After my quick gush about The Seventh Voyage of Sinbad, he and his co-author, Tony Dalton, also told me that they've found lost footage from Seventh Voyage and there's going to be a new book on the subject next year. Good to hear. And another heartening aspect of the event was that there were a few quite young kids there to meet him and who were into stop motion animation themselves. They knew who he was, despite so many folks my age wanting to write off the younger generation. And he seemed very pleased that they were helping to keep stop motion alive and kicking. Movies like Coraline and well known people like Nick Park and Tim Burton are a part of this also, but they all owe this man a debt. I wonder how likely it is that kids who love modern VFX can name any of the pioneers of that form. Denis Muren, maybe (Another name I knew very early on)?

Harryhausen's the first of my early childhood heroes I've met but I've seen another in action on the set; although, in hindsight, George Lucas has blotted his copy book in recent years. But not totally, mind you (that's a debate for another day). Meeting Terry Gilliam was cool when I was 18 but he was more of a late teens hero and he was great in person. Very generous considering how tired he clearly was.

But, I got the chance to meet one of the people partly responsible for forming my direction in life from a very early age. And to top it all off, his words to me were "Thanks." I left with a very big smile on my otherwise grim visage.