I just got finished watching a documentary on BBC4 about the depiction of dinosaurs throughout cinema history. And I have to say I'm pretty pissed at it.

In terms of the modern depictions mentioned, Jurassic Park was obviously the big mention. And well deserved as well as it's still brilliant. I saw it on the big screen at the weekend on re-release with a shiny new digital print and it's lost none of its thrill and wonder.

What has partially pissed me off is the cynical discussion of CGI in the documentary. Jurassic Park gets the lion's share of attention but the 1998 version of Godzilla and Peter Jackson's remake of King Kong are also brought up, mainly to slag off "Hollywood" (completely omitting to mention that 98's Godzilla was written and directed by a German) and also to have various critics appear in the usual head shots to criticise CGI saying that it has given filmmakers too much power. This is a fair argument, as any shiny new tool that brings in audiences will guarantee its overuse and dilution, even if it was as one sided as usual. However, it's not the criticism of CGI that has annoyed me, but the complete lack of any mention of the puppets involved.

Everybody who thinks visual effects in movies today automatically thinks of CGI and nothing else, never talking about people like Stan Winston or the Henson Workshop, making incredible prosthetics and animatronics that should blend seamlessly with CGI. Everything has its place on the screen, all coming together to create the ultimate illusion. An entire industry, a while slew of craftspeople and artists who work their behinds off are ignored because lazy programme writers want to go for the obvious. The T-Rex attack on the cars in Jurassic Park is a great example of the two techniques being combined for the sake of the shot. A full body animatronic T-Rex was built and is seen in its entirety in several shots (one or two shots have the puppet do one thing in the frame, leave the frame and re-enter as CG, doing what puppets cannot) and I've read that Spielberg was adamant that CG be used where animatronics would not would, not filling the screen with CG as so many people like to think. Nor did the programme makers stop to consider that Jurassic Park was the first movie of its kind to attempt to show the anatomy of dinosaurs and how they truly might have moved in a more accurate light (although, paleontology being the science it is, ideas and theories are constantly shifting). It might not have been spot on, but at least they tried.

I suppose it is true that the CG work as amazing when it blends so well with live action puppets but I get so annoyed when people generalise about VFX like this. It's lazy, it's cynical and its insulting to the people who create these creatures. A look at the work of Guillermo del Toro is a great example, particularly in Pan's Labyrinth and Hellboy 2, where huge creatures are not necessarily CGI but sophisticated puppets featuring more intricate design than most high end computers would be able to render. The full bodied puppet used for the troll, Wink, is amazing. And what's more, light shines off them naturally, which must surely be the bane of a CG modeller and lighter - it's always a give away.

This even goes for virtual sets as well. In The Lord of the Rings trilogy and the Star Wars Prequel trilogy, so many shots of wide environments, such as the city of Minas Tirith, Helm's Deep, the Podrace Arena or Chewbacca's home world of Kashyyk, are based around huge miniature sets that are augmented by CG. Model and puppet making are not extinct as people say and are still around. I only wish people would talk about them more instead of insecurely concentrating on shouting about CG. It only feeds the ignorance of the audience.

Which is not to say that I'm anti-CGI. I'm not. In fact I've had a few loud debates where I've wound up defending CGI. But everything has its place and it rarely takes one technique to create the fantastic.

Well, rant over. I'm off to watch scantily clad cave women be harassed by stop motion dinosaurs. Or get a Lemsip and sleep. Whichever first. God bless the BBC, despite my rant.
Posted by Brian Robinson at 23:12 No comments:

I've added a new banner to the top of the page, once again from my old short, Baal and Ben, cut from the picture above.

I know some friends who are likely to say, "Jeez, Brian, this was too long ago! Put it away! Don't wallow in the past!". Well, I agree. In part. But writing is such a lonely and at times horrid activity that it's far too easy to lose sight of things.

I still want to make films as well as sit and write them. Looking at some of the old stills from Baal and Ben, I'm now quite proud of what we pulled off for very little money (shot on 16mm for £1,300), even if I found it hard to watch at the time. And, yes, it was a long time ago. But I look at those stills and remember what I was capable of and feel encouraged. And it reminds me of the reaction it got at it's first screening, which was very good. Head swellingly good. Finding encouragement as a writer can be very difficult and if no one else is around (but people normally are) to keep you going during those black moments then you need to draw upon yourself and what you've achieved.

I've made a few more shorts since then, but this is the one that always sticks with me. I need to know I've done it before and can do it again.

If you feel lost, always think back to what you've achieved, regardless of whether it's a film or not. If no one else is encouraging you, sod 'em and push yourself.

So, there it is. Another unnecessary justification for my actions.

Going through the latest draft of my current project before I start making notes on subsequent revisions. Oh yes, there will be several revisions, each looking at different aspects of the thing. I have to take my normally undisciplined mind and force it to be methodical. But on reading this latest draft...

Lots to fix, trim, replace and improve. One of the hardest things is not to try and tinker with it as I'm reading and just absorb the whole thing. Really not easy (I've changed a couple of lines already).

And besides, here I am blogging instead of reading.
Posted by Brian Robinson at 16:12 No comments:

Email ThisBlogThis!Share to TwitterShare to FacebookShare to Pinterest
Labels: screenwriting

Well, after a spectacularly horrendous weekend, things have to go on. Even losing an animal member of the household puts things into perspective. Those old thoughts of mortality push you onwards.

So, I'm glad I've finished a third draft of my current project. Very relieved but there is still work to do. I'm going to let it stew on it's own for a week before I set about revising it. I already know I have to lose at least 15 pages (it clocks in at 134 pages right now) so one pretty expendable sub plot is for the chop, some scenes are going to be combined and there is still some character work to do. It's taken me far too long, however, eve if it is a page one re-write. A hell of a lot of re-working. My two lead characters share the same relationship but they are significantly different in their social standing and ages. A few years off someone's age can make a huge difference to them as a character. And I'm hoping that the exposition which dragged the previous draft down is now far more subtle and woven into the story and experienced by the reader/audience as it is by the main character.

But, milestones are milestones and I'm glad this one has finally been reached. Some other ideas which have been floating around my skull and notebooks are going to get some long overdue attention now.

I feel a reward viewing of Aliens on Blu-Ray and the new Anthrax album coming on. After housework.
Posted by Brian Robinson at 10:21 No comments: 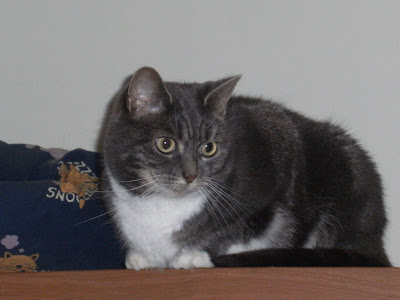 Our hearts are broken.

She was the centre of my wife's world and the heart of our home. Loving, fierce, very definitely the Boss (our dogs knew their place with her) and utterly devoted to my wife.

Sleep well, Midge, and thank you for all the love you gave us.
Posted by Brian Robinson at 15:52 1 comment:

Today is an emotional and very, very hard day. I wish it was because of something as relatively piffling as work but it's not. I want it to be over but I wish it hadn't started at all.

There is so much love in our house.
Posted by Brian Robinson at 13:33 No comments:

I was left with an intense desire to stick the Milius version on when I got home.

However, Jason Mamoa is actually pretty good as Conan; his enthusiasm is there to see on screen and is backed up with his own recent comments on the character and his desire to actually write a Conan screenplay himself. He could surpass Arnie with the character if they made another one.

Contrary to early fanboy fears, it is pretty damn violent and is actually quite mental in that sense.

But how can a film so frenetic and willfully gleeful in its comic violence be so damn dull? With each loud bang or musical cue signifying anything happening onscreen, I actually felt like I was being lulled to sleep. Some of the violence is pretty damn funny and there are some standout moments but these are diluted by the sheer dipshit direction and writing on display.

Completely formulaic and predicable with some supporting characters and sidekicks who appear and disappear at will, not doing very much, just serving the odd purpose and leaving. Little in the way of character arcs for anyone and an inexplicable and frankly inappropriate narration from Morgan Freeman. Even the Milius version, as nuts as it is, had Conan on a decent character journey, experiencing loss, punishment for folly and emerging maybe slightly different at the end. Slightly.

I'm just glad I didn't see it in 3D but I felt the film was relying on that too much, given the narrative standards on display in the 2D version I saw.

Better luck next time. Shit film but I wouldn't mind seeing Mamoa as Conan again so long as the film is made by other people who give a shit about proper movies.
Posted by Brian Robinson at 13:10 No comments: