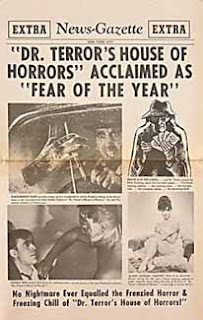 A search for portmanteau horror proved fruitless today. Among the titles I was after, Dr Terror's House of Horror, The Vault of Horror, The House that Dripped Blood and Tales from the Crypt, I found absolutely no trace at the only HMV I was able to get to (i.e. park free) except for an empty place card for Vault of Horror.

Bloody hell. Must try harder (me or the retailers?). Actually, there's this thing called the internet. Might I be able to somehow purchase these films...online? There's not even a DVD rental place where I live now. Nor in the next town. What's that, I hear you say. LoveFilm? I must OWN these things, you fool!

Loads of straight to DVD US bullshit non-horror "horror" and gorno in HMV but none of what I was after. Severely disappointing. My search goes on. I also now want to get my hands on Zulu, Where Eagles Dare & Went the Day Well after recommendations from a good friend (think I've got The Eagle has Landed somewhere on VHS, Colin). I saw the first two titles as a nipper but they now bear analysis it seems. Plus, Burton and Eastwood in the same film. Genius! I always remember that cold shiver down my spine as Donald Houston fell from the cable car, straight down from camera, years before John McTeirnan had Alan Rickman grasp in futility at Bonnie Bedelia's new watch atop the Nakatomi Plaza. Brilliant.

Yippekyay, Doctor Schreck.
Posted by Brian Robinson at 22:21 No comments:

When I Missed Gorgo 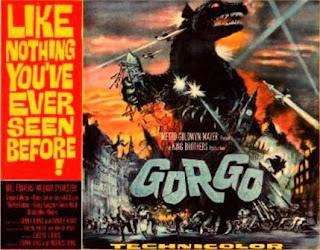 Over at Shadowplay, David Cairns' quest to "See Reptilicus & Die!" got me thinking about a monster movie I'm keen to see again. Or actually see in its entirety this time. Must have been about 9 or 10 and we (me, bro & sis) were to go across the road to friends of our parents while they went out for a meal. Mum and Dad get ready and then BBC2 start to show Gorgo! That rare thing, a UK Man in a Suit Monster film, like Konga. I had a real thing for big monster movies at this point and so I became attached to the TV instantly. Gorgo was basically Godzilla, except he (or they, as his mum did much of the smashing) had weird webbed ears and attacked London as opposed to Tokyo. Poor Tokyo. At least they got the day off from Gorgo.

The time came to nip across the road to Mrs Burns' house. Off we went, or off I hurried to continue watching Gorgo. We didn't have a VCR at the time and my mum assured me, half-heartedly, that I could watch the rest across the road. My dad had already teased me about what happened next as he had already seen Gorgo as a kid and I was anxious to see Mummy Gorgo come back to claim her captured offspring. "Wait til you see her! She's 10 times the size he is!" he cried. My enthusiasm grew exponentially. And then we got into Mrs Burns' house where we had some juice and biscuits and I asked to see the rest of Gorgo. Could I?

I'll never know why, but old Mrs Burns' (in her 60's I think) refused, giving no real reason. A film called BMX Bandits was on the other channel. We could watch that, she said.

My protestations that the central character in Gorgo was in fact a young boy fell on deaf ears. All I knew was that each second I watched these irritating Australian kids zipping around on their bikes solving some crime I didn't care about, was another second I was missing of Gorgo!

No huge loss in the grand scheme of things, but as a kid, horrendous. Until the next day, when I generally forgot about it went on to the next thing. And this is the closest I can get to it right now:

One of many films I want to see again, probably unwisely. But you can't beat a Man in a Suit Monster Movie. I love the fact that in this age of CG, they still make them like that in Japan. In fact, Man in a Suit Godzilla went up against the CG version of Roland Emmerich's Godzilla, now called Zilla in Japan.

Good ol' Gojira kicked his pixellated arse back into the ocean. This is what happens when rubber meets CG.
Posted by Brian Robinson at 17:11 2 comments: 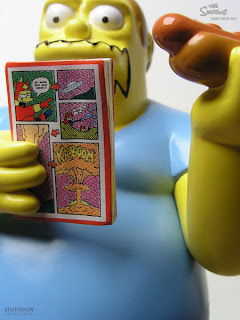 I'll not wholly condemn all torrenting as there are many rare and unobtainable gems out there. But if you watch this film for free, see it again and pay for it instead of acting like spoilt, selfish brats.
Posted by Brian Robinson at 11:20 No comments: