Short - One for the Road

As I said in my previous post, here's a short I wrote and directed a few years ago (2002) as a part of Edinburgh Mediabase's 48 Hours short film scheme.

Mediabase used to hold a monthly screening at the Cameo Cinema in Edinburgh called The Blue Room and they would hold a competition each month to see who could come up with the best idea to match their monthly 48 Hours brief. I bagged it in October 2002 and it concerned Vampires and Kung Fu. Not being a Kung Fu fan, I kept the vampires bit and had them have a drunken match of violent one-upmanship.

The conditions of the scheme were simple - 24 hours to shoot the film with Mediabase equipment and 24 hours of edit time. Everyone jumped in and this is the result. It's pretty rough around the edges and a bit rubbish in one point (for me at least) but it got the laughs on the night, which was the point. I've also got some stills of the shoot I might post later.

Posted by Brian Robinson at 20:19 No comments: 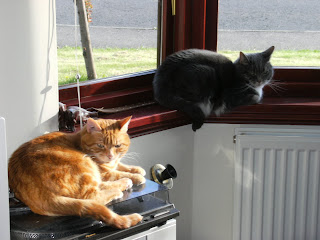 I'm back to the filmmaking, I am.
Posted by Brian Robinson at 10:48 No comments: 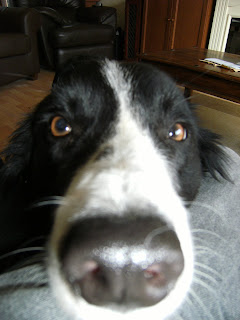 And not to forget my pal, Isla. 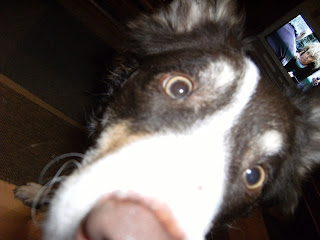 Bless those beasties, keeping me company as I try to type.
Posted by Brian Robinson at 20:18 1 comment:

Pardon my pink purulence - necessary to show 2 two of the 5 pads I had taped to my chest last week.

So, I had the heart monitor removed; in and out in a few minutes, literally. I didn't even have time to sit down for more than 20 seconds in the waiting room before I was seen. It was a bit odd to be surrounded by loads of old ladies getting their hearts seen to. I'm only 35 for fuck's sake! Felt a bit like Rod Taylor at the end of The Birds, especially as I was the first to be seen, feeling dozens of myopic eyes kind of following me with vague menace/gossip/suspicion.

Anyway, I was told that the data will be examined by a cardiologist and I'll hear the results in about 3 weeks. That being a week ago it should be about a fortnight but we'll see. I didn't have any symptoms whilst wearing the monitor, though. Sod's Law. And I did have a some today - whilst driving, which was mildly scary. But I did have some Cola to drink before I left and have a feeling that that may be where the trouble lies. At least I hope so.

Thanks to the folks who left messages. Did a fair bit to lift me up. Thanks all.
Posted by Brian Robinson at 19:51 No comments: 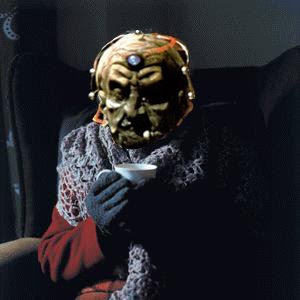 I have a cold.

That is all.
Posted by Brian Robinson at 19:32 No comments:

I'm having a 24 hour heart monitor fitted tomorrow. Very, very nervous. It's not an operation - I'll be in and out on the same morning - but my mortality seems very real these days, especially in the light of the awful situation a friend of mine finds himself in now. Once fitted, I'm to go about my regular business and then I'll have it removed the next morning (hence the 24 hour bit...).

I've been having palpitations for a while now. I do suffer from anxiety attacks and depression and only hope that these are a consequence of that and nothing else. There is a history of heart trouble on my mum's side of the family and I had a heart murmur as a baby. That, together a couple of stone I could do without and my constant fear of dropping dead at any given moment, add up for a very worried Squirrel Scarer.
Posted by Brian Robinson at 18:30 2 comments:

Working on a script for months, it's easy to lose sight of what you were setting out to do in the first place. You start out with that fantastic feeling in your stomach, a combination of nerves and loving the spark that your idea is giving you. And then you get down to it. Progression. And, as with any creative exercise, problems arise. And you endeavour to fix those problems. And so it goes on. Until you reach a point where you feel that this script will sit unfinished for weeks. Maybe months. And the danger of things becoming a slog can creep in. And you trudge on until it's done.

And then you read it and all the blood drains from your face.

After some alcohol (but never immediately after - danger danger!), the rewrite begins. Irritance at problems staring you in the face. Going back to notes. Wondering if it'll ever be what you want it to be. And you finish it, to the best of your abilities at that given time.

And it's become something else. And you've lost sight of that wonderful feeling the idea gave you when you started out.

Until you let someone read it. Just for an opinion. Not a script expert, but you trust their word. Is it any good? Would it make a good movie? How shit is it? Presuming that everyone else can see all of the glaring errors and bad plasterwork over those initial cracks. The reply comes. You shut your eyes tight before you open it.

And then, for a little while at least, vindication hits you. It's worth it after all. Someone else saw what you were aiming for when you started out, and confidence returns. It's not shit. They like it. A lot.

And all is right with the world.

Time for a beer, methinks.
Posted by Brian Robinson at 22:03 No comments:

Another Self Portrait of a Mug: 2 of 4 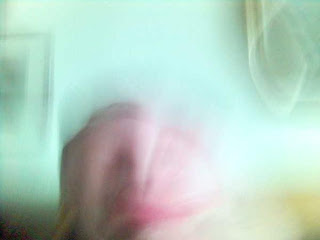 Kind of foetus-like. Or not.

Gee, aren't I clever?
Posted by Brian Robinson at 11:32 No comments:

Another Self Portrait of a Mug: 1 of 4 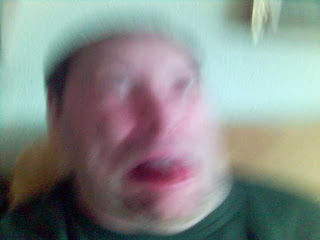 Another one of my strange physiog. 1 in a series of 4. Taken with a mobile phone, shaking it whilst making stupid faces. Not unlike Ronny Cox's demise as shown in previous posts.
Posted by Brian Robinson at 13:30 No comments: