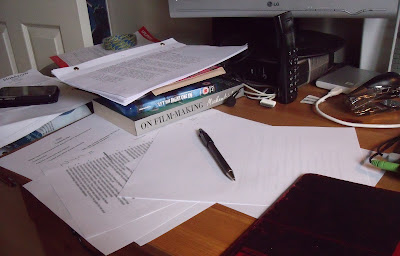 Back to the bloody mess on the page.
Posted by Brian Robinson at 12:25 No comments:

I Am Breathing - Trailer

Anyone who's read this blog for the last few years will likely be aware of the loss of my good friend, Neil Platt, in 2009 to Motor Neurone Disease (known as ALS in the US), an appalling affliction that has robbed his family of several loved ones. Another good friend, filmmaker Morag MacKinnon and her comrade in arms, Emma Davie, were asked by Neil to document his final few months. They did and after several years the film will receive it's premiere on Saturday 17th November in Amsterdam at the International Documentary Film Festival.

A new trailer for the film has been released.

More information about Neil, MND and the film can be found at the official website - I Am Breathing.

I still miss that no-nonsense Yorkshireman and our Saturday pissups at Edinburgh rock clubs. Some people leave the deepest impressions and Platt was no exception.
Posted by Brian Robinson at 21:29 No comments:

I've recently been using the 8 Sequence theory, made popular by the late screenwriting tutor, Frank Daniel. While I never like to adhere to one train of though on these matters, I've been finding it incredibly useful and is a real boost when dealing with the dangers of Act 2. My current project, which I'm expanding from outline to longer treatment right now, has benefited from it and I thought I'd try a simple experiment of applying the 8 Act structure to a film I know well. I have to emphasise that this is a very simple application.

Essentially, it boils down to a problem, or want/desire, gives us a complication to get in the way of achieving that goal and then resolves the problem. Screenwriting 101, frankly. But the most important thing is that the resolution must propel the story further on. It has to not only solve what has gone before (or not, as the case may be) but also serve to set up more complications. To quote a screenwriter (Aline Brosh McKenna) I recently read on writing, "you want your movies to have a 'because' between each of your scenes and not an 'and then' between them".

In short, each bit of a story has to set up the next; a logical progression of flow. Of course, this story propulsion must be applied to any technique of screenwriting (or dramatic writing of any type) unless you deliberately want to go for an episodic structure. From 3 Act to anything else, but even then I try to let things become organic in my head and not stick slavishly to a template. Some people complain about screenwriting theory and say it is damaging to true creativity but I disagree. Just don't let it rule what you right.

I picked Indiana Jones and the Last Crusade as its structure has stood out to me, even when I was a kid. One of the things I discovered is that it tends to shift location with each new sequence. I think it's an easy way to start making sense of the theory. 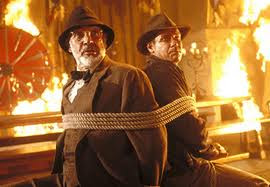 Indiana Jones and the Last Crusade in Eight Sequences

Sequence 2 – Donovan and The Grail Quest

Problem:  Walter Donovan wants Indy to help him find the Holy Grail.
Complicated by: Indy’s father, Henry, has disappeared looking for the Grail.
Resolution: Indy goes in search of Henry.

Problem: Indy, Marcus and Elsa look for the second marker on the trail of the Grail.
Complicated by: The Brotherhood of the Cruciform Sword, led by Kazim, tries to kill Indy.
Resolution: The second marker is found and Kazim tells Indy where Henry is being held.

Problem: Indy searches the castle for his Dad.
Complicated by: Elsa is a traitor, the Grail diary is taken and Indy is captured.
Resolution: Indy escapes the castle with Henry via motorbike chase.

Problem: Indy and Henry must find Marcus as he has the map.
Complicated by: They still need the Grail Diary, now in the hands of the Nazis in Berlin.
Resolution: Indy and Henry escape Germany with the Diary aboard a zeppelin.

Sequence 6 – Keeping up with the Joneses / Turkey

Problem: Indy and Henry have been detected aboard the zeppelin and must get to Sallah in Iskenderun.
Complicated by: German fighter planes are pursuing them and Indy has no bullets left.
Resolution: Indy watches his father defeat the planes and sees value in his Father's knowledge.

Problem: Indy must beat the Nazis to the location of the Grail using the map.
Complicated by: The Nazis have the map and Indy’s father is captured.
Resolution: Indy rescues Henry and Marcus. Henry realises he loves his son.

Problem: Donovan and the Nazis have reached the final stage in the search for the Grail.
Complicated by: Donovan shoots Henry, forcing Indy to endure the final tests of the Grail.
Resolution:  Indy finds the Grail and heals his father (relationship is also healed) and finally Henry lets the Grail go.

Many of the sequences, especially the latter ones, also end with an emotional beat as well, demonstrating one of the reasons Last Crusade is well regarded; it's not just a treasure hunt but a story about a father and son reconciling.

Like I said, simple stuff but it helps tremendously in the planning and outline stages, which is important to me.I may try this with other films and recommend it to others as a way of trying to make things a bit more ordered and coherent. And, like I also said, it's just one of many tools out there.

Increase your writing toolbox!
Posted by Brian Robinson at 15:49 1 comment:

Back from the ether...

Bimey. 2 and a half months.

A few nights ago, a friend a fellow blogger, Conan the Librarian, asked if I'd stopped my blog. The simple answer was no but I understood what he meant. It's been a long while since I last posted and before then I had all sorts of things I wanted to post about (and still do).

What have I been doing? Well, for the bulk of that time I had been writing an outline for a new feature project I'm collaborating on with some friends. That went down well and so now I'm working on a longer treatment document before we go to a first draft. I was also working full time for a while but that job ended (the hazards of temping) and I'm still looking for more work (the hazards of relying on temping). And sometimes it's just so easy to let something like this blog slip away. That, and trying to get through the episodes of Mad Men, Boardwalk Empire, The Thick of It and Dallas (yes, Dallas, so sue me; I'm a child of the 70s & 80s) that are dominating our DVR right now.

I've also joined a gym. Been quite disgusted at my appearance of late so I'm bidding farewell to a few stone (one stone is 14 llbs, to my US friends). Getting fitter ought to help with the old motivation and general demeanour.

So, it's back on with the blog. There was a tiny wee news story about Star Wars last week I might just have something to say about.

In the meantime, this is brilliant and is a good shot in the arm when needing reminded about the ultimate goal in filmmaking (for me, anyway).


Good, no? See you at the movies.
Posted by Brian Robinson at 11:25 No comments: