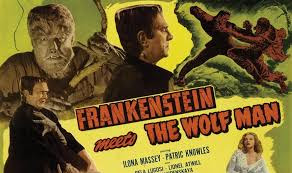 Two titans of horror go toe to toe in a terrifying supernatural battle!

Kind of. Frankenstein Meets the Wolf Man (1943) does appear to mark the first crossover between two different film properties/characters but it’s a bit of a disappointment when it comes to any shared scenes or battles between the two monsters. That being said, it’s no House of Dracula, for which we should be thankful, and it does offer a decent bit of horror hokum. George Waggner this time produces, as he would for the next few instalments, with direction now from Roy William Neill, who deals with the proceedings pretty well. Gone are Waggner’s foggy woods, replaced by the environment of Frankenstein, but without James Whale’s expressionist lens.

His tomb opened up by grave robbers, it turns out that Lawrence Talbot is not dead after having his head stoved in by daddy, Claude Rains, in the previous film. He’s lain dormant for four years and is now looking for a way to die and be released from his curse. So, the very weapon he used to kill Bela Lugosi’s werewolf failed to kill him, with no explanation other than, “I can’t die!”

I think Chaney is better here than in his debut as the Wolf Man, eliciting more sympathy now as the tragic Talbot. His quest takes him to a remote village somewhere in Europe where he has tracked down the old gypsy woman, Maleva, from the previous film (Maria Ouspenskaya). Again, Ouspenskaya brings some dignity and genuine sympathy to the proceedings, and she knows a man who might be able to help Talbot achieve his dream of dying. They travel to a small village, which looks remarkably like the very same “Welsh” village Talbot called home; the Universal backlot saw a lot of action in these films. Entering an inn, where every head turns to view them with suspicion, the sheer mention of the name Frankenstein is met with hostility.

Not long after, Talbot falls prey to the curse once again and flees from Maleva as he transforms. She calls after him to stay and he turns and snarls before heading into the woods – why he didn’t see he had a quick victim right there in front of him I do not know. Consequently, a young girl dies, and we are granted a restaging of the famous scene form James Whale’s Frankenstein (1931), where the father of the young girl mistakenly drowned by the Monster cradles her as he mournfully walks up the street. Only this time, this father has a ready-made mob backing him up from the get-go. Add in Dwight Frye as a villager (in one of his final roles) and it’s starting to look more like a Frankenstein film after all. Talbot finds his way into the cellars of the old castle (after another round of creepy behaviour with Baroness Frankenstein to get some info) and discovers the Frankenstein Monster entombed in ice. Ice and snow, underneath a castle, with no apparent cold weather up above. What kind of weather systems operate in this crazy crossover world? Ah, it’s not worth thinking about. This will never live up to its predecessors, so I just sit back and have fun with it all. 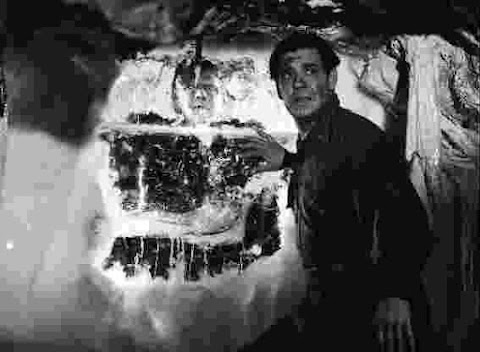 As we expect, the Monster is released, this time played by Bela Lugosi, after he initially turned the role down for the first film. I’ve not watched Ghost of Frankenstein (1942) yet, so I don’t know how effective Chaney was as the Monster, but Lugosi gives it a decent go, wandering around with arms outstretched. I mean, he’s alright, I suppose. I read that he had some lines in his native accent, but they were cut after being laughed at, so we don’t know he’s blind, apparently. That would explain the cliched staggering around which became synonymous with the role later on. He "raars" a bit but gone is the empathy one felt with Karloff's Monster. Now, he's just a monster, small "m", who Talbot leads around like a dog and master. 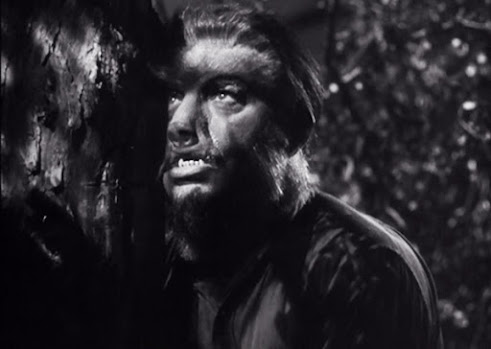 There are some good werewolf transitions again, with Jack Pierce's make up looking even better, and Patric Knowles, seen as the blank faced love interest in The Wolf Man, appears again this time as Talbot’s doctor who gives in to scientific curiosity and empowers the Monster instead of destroying it. It seems scientists are doomed in these films. 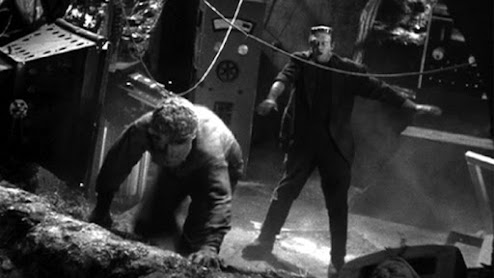 . The moment we’ve all been waiting for follows as the Monster breaks free, intent on abducting Baroness Frankenstein, while a convenient full moon, shining through a convenient window transforms Talbot into the Wolf Man once again and they fight for a bit before they are both washed away in flood water after a zealous villager blows up the dam powering the lab. The lab scenes are not bad, with the usual Tesla coil jiggery-pokery. But the end comes very quickly, without even any kind of coda as “The End” appears as the waters rage. 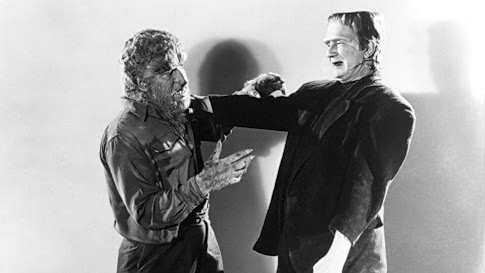 The finale is a bit rushed, and the Frankenstein Monster isn’t even seen until fairly late in the film, which feels a bit of a cheat given the order of the names in the film’s title. To that end, it definitely feels like more of a Wolf Man film. It’s not up there with its predecessors, but it sets the tone for what’s to come.