October - Month of the Werewolf! 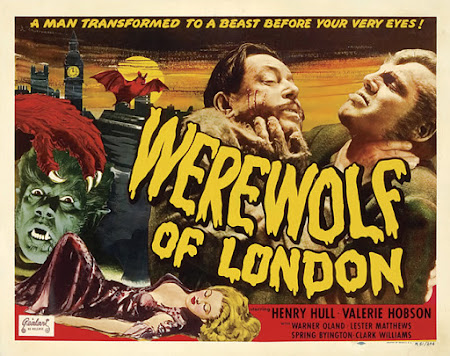 I'm blogging again. God help us all. It's October, so that means Halloween, which means horror films. I guess, like Christmas, we make these things a month long now. And I like Christmas a whole lot more than Halloween. But why not embrace it? Setting myself a challenge this year (yes, I know, this has been said before) of watching at least one werewolf film a day for the month. Well, it's day 1 and I'm two lycanthropic features in already.

First up is Wolfblood - A Tale of the Forest, from 1925, directed by George Cheseboro and Bruce Mitchell. I believe it's the earliest surviving werewolf feature, with two previous entries now lost (The Werewolf, 1913, and White Wolf, 1914). It's a handsomely mounted silent production with nice performances which I found to be without the usual overacting and melodramatic grimacing typical of the silent era; which is not to say that realism is the key. But that being said, there is a good sense of location, with the story set in the forests of Canada, featuring some beautiful, stark imagery that wouldn't look out of place in the German Expressionist films of the time in Europe. The fact that it's shot in real, frankly majestic locations helps the film a great deal. 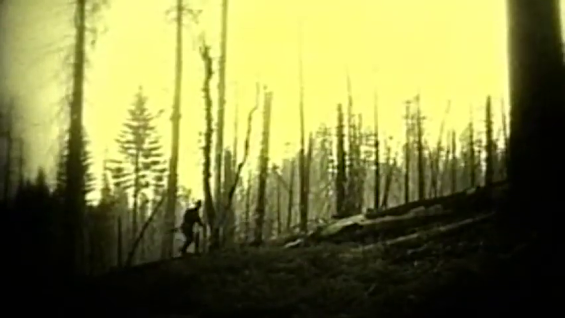 Here, the trees are both beautiful and intimidating, cutting sharp, black lines through the frame, sometimes thick and never ending, almost imprisoning the characters or sometimes thin and cut off at the top; we're dealing with rival logging companies and what looked like progress back then now looks like a reduced vision of the Tunguska event in 1908. The trees are broken and jagged at their tops, angry at the tiny people Cheseboro and Mitchell often place at the bottom of the frame. There's a feel that nature is a hostile environment that almost consumes our main character, Bannister (played by co-director Cheseboro) while he believes himself to be more wolf than man. 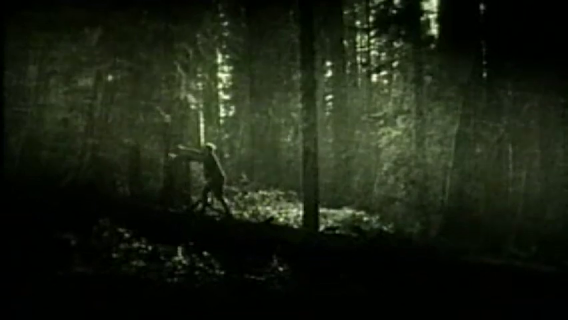 And that's where the inevitable disappointment comes in - there is no werewolf here, this is a melodrama. Bannister is gravely injured in a fight with the nasty boss of a rival company and requires a blood transfusion when discovered by his love rival, Dr Horton (Ray Hanford), a decent sort who saves the rugged man his fiancé is clearly more interested in. The only shelter is the nearby shack of a local bootlegger who refuses to donate his blood. He suggests using his wolf instead, so Dr Horton proceeds, all the while painfully aware (as we are, due to protracted close up shots of medical text) that there is a theory that any human who receives animal blood may exhibit the characteristics of said beast. And then someone seems to be killed by a wolf. Self-doubt ensues, as it seems to in werewolf movies (Lon Chaney Jr made a career out of werewolf-ish guilt and self-doubt). 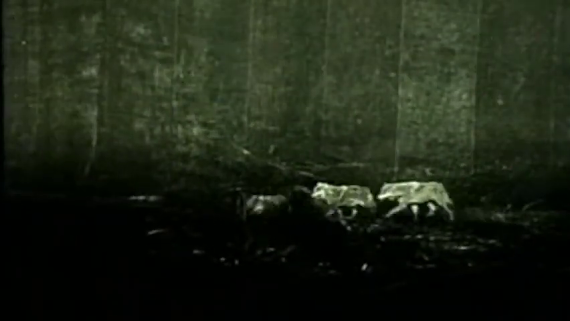 Once this is revealed, Bannister's superstitious men turn their backs on him and he too becomes convinced that he's destined to walk the earth as an animal, nicely shown in a scene where he follows a vision of phantom wolves into the forest and almost to his doom over a 1,000 foot drop, only to be rescued by his boss and love interest, Edith Ford (Marguerite Clayton). It's all very much about what nature can do to a person if left out there too long. Well, from a 1920's perspective at any rate (give me some of that forested solitude, or a Hobbit hole of my own). The images of the phantom wolves, done by double exposure, are wonderful. Here, the fear of losing control to primal instincts is defeated by love. 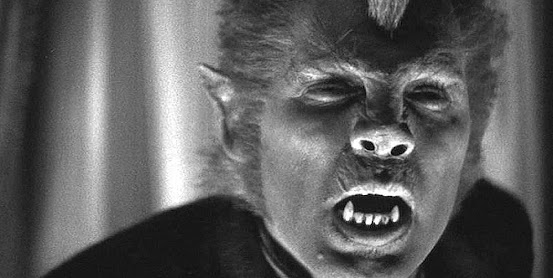 Next up was Universal's Werewolf of London (1935) which I saw as a teenager, so obviously not seen by me for a very long time. In fact, I think this might be the very first werewolf film I ever saw, likely on BBC2 sometime in the mid 1980s; either this or Werewolf of Washington (1973), a very different film. It should obviously be noted that Universal studios will be making quite a few appearances on this blog series.

Werewolf of London is the first sound werewolf feature and brings in more of the tropes we associate with the sub-genre, particularly the influence of the full moon. Dr Wilfred Glendon (Henry Hull) is a botanist on a trip to Tibet to retrieve a specimen of a rare plant when he's attacked by a strange wild creature and bitten. Not too much is made of this on his return home to his much younger bride Lisa (Valerie Hobson - she must have been 18 to Hull's 45 years), who he neglects in favour of his research It's bleedin' obvious where that's going when Lisa's old childhood friend turns up, all tall, handsome and an adventurer pilot to boot. 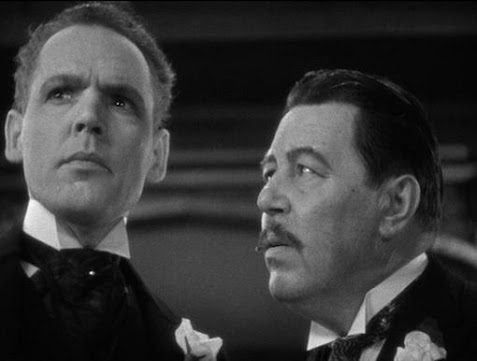 While Werewolf of London is a full on werewolf film it's also a mad scientist film with elements of science fiction; some marvellous carnivorous plants populate Glendon's lab where ladies faint during feeding time, and he has his own version of Ring Home Security with a video phone operated by a telephone rotary dial. An almost steampunkish look, blending the tech of the time with futurey stuff. Warner Oland turns up, sans Charlie Chan make up, as another botanist suspiciously interested in Glendon's work. Wait, who was that werewolf that bit him again...?

Hull's wolfman is more obviously human in his appearance. There are apocryphal tales of Hull refusing to sit in Jack Pierce's make up chair for the original make up, which would eventually be used on Lon Chaney Jr as The Wolfman, but it seems they went ith a more human look so that other characters would recognise Glendon in his werewolf state. 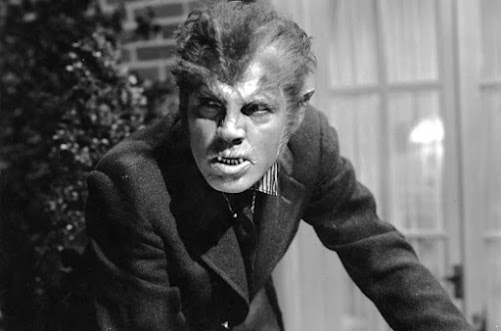 His werewolf seems to have a bit more agency over his actions, donning a cap and long caot while prowling the streets at night for victims. He comes across as more of a Mr Hyde character this way, even making reference to Jack the Ripper in his choice of victims. Hull's wolfman even speaks, intelligently, as he meets his demise, before he reverts to his human appearance. Werewolf of London seems to work along the same lines as Frankenstein, a cautionary tale against tampering with nature; Glendon is a scientist, after all, with his own lab, complete with Tesla coil and giant frog eating plants. And it is with another scientist he must struggle with in order to try and maintain his own humanity. There was always a price to pay for being a scientist in these movies, and so Glendon pays the price not only for that but for also giving in to primal instincts. Such is the way of the werewolf. 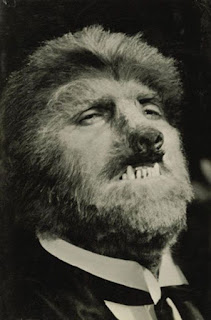 A test of Jack Pierce's original make-up concept, which looks far more familiar than the one used, which would eventually give us Eddie Munster.