Month of the Werewolf - Two Comedies and a Biker Flick

A few to catch up with from the past few days. 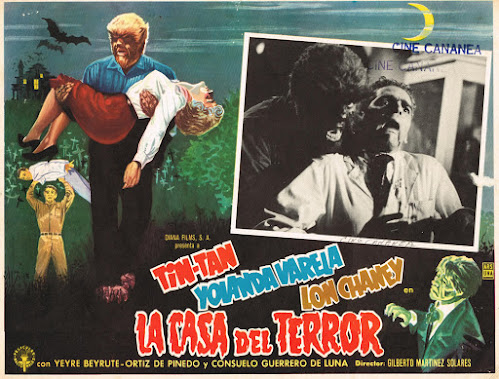 First up, La Casa del Terror (The House of Terror, 1960). Jumping backwards in time a little bit, my next werewolf film was meant to be Face of the Screaming Werewolf (1964) which is just a brilliant title. I want to see a film with that title, but just not this particular one as it’s a cut and shut job, like a dodgy car. Two Mexican films were stitched together to create what is said to be an incoherent mess that just takes advantage of the fact that Lon Chaney Jr appeared in one of the two films, while much of the rest of that film was removed. And it’s dubbed, so thaty  knocked it from the list. What remained, though, was an interest in the original film, a Mexican comedy horror in which Chaney appeared, La Casa del Terror. 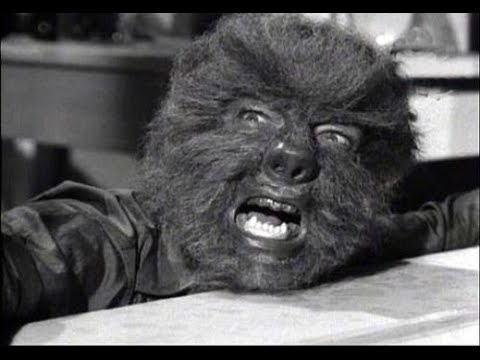 A comedy vehicle for German Valdez, popularly known as Tin Tan, appearing as Casimiro, the night guard in a wax museum which also happens to be run by a mad scientist. The filmmakers persuaded Lon Chaney Jr to appear as an obvious Wolf Man imitation, not just any old werewolf, but with the added bonus of him being a Mummy as well, a blend that the US distributors of Frankenstein’s Bloody Terror (1968) failed to achieve. This one embraces the absurdity and tropes of its predecessors, complete with a King Kong reference, as the Wolf Man (clearely not Chaney at this moment) scales a city building with his unconscious damsel over his shoulder, only to reach the top and then use the stairs to get back down again, achieving very little. The villain of the piece, the mad Professor Sebastian (Yerye Beirute), who bears more than a passing resemblance to Boris Karloff, with yet another plan to reanimate corpses to dominate the world. 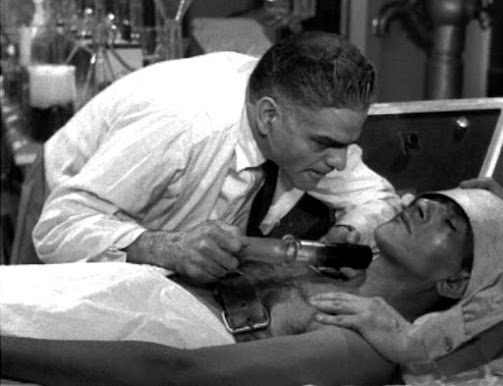 Above all, this is an obvious vehicle for Tin Tan, who does no favours to the horrid stereotype of Mexicans being lazy and eating too much. Chaney is clearly tired and was not happy with playing a Wolf Man again. His performance veers directly into tragic Talbot territory (literally the same performance) but without any dialogue, and his make-up looks like a poor man’s version of Pierce’s design, which leads to the feeling that the filmmakers wanted to simply have Universal’s character in their film. The only effective horror scene is where he is silently stalking Casimiro’s girlfriend, Paquita (Yolanda Varela), with visual reference to the stalking scene in Cat People (1942), and this continues into her apartment with some nice tension, but it all falls apart when he is revealed to her, featuring a terrible and slow “attack” scene. It’s entertaining enough with an agreeable balance between Tin Tan’s comedy and the horror plotline. But I felt terribly sorry for Chaney here, he's not in good shape and this part does little for any sense of dignity. 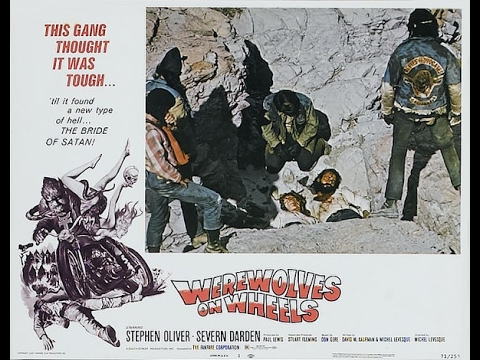 You can’t get much more of an exploitation film by crossing a Biker movie with a Monster movie, but like most exploitation films, that’s all there is here, and there’s not even too much of that. Werewolves on Wheels (1971) has a decent start with obvious Biker movie style; dust trails on the road from a distance, chrome trims, crazy hogs and wild, violent biker gangs. This particular gang seek shelter in appears to be a Satanist temple and are met with surprising hospitality by the Satanists in residence, offered lots of food and drink which turns out to be drugged, so they can have their way with one of the female bikers. Comedian Severn Darden, from both Conquest of the Planet of the Apes (1972) and Battle for the Planet of the Apes (1973), features as the leader of the cult, his face caked in dark make-up. The ritual is interrupted and the bikers attack, only for the girl and her boyfriend and leader of the pack, Adam (Steven Oliver) to become cursed as werewolves. 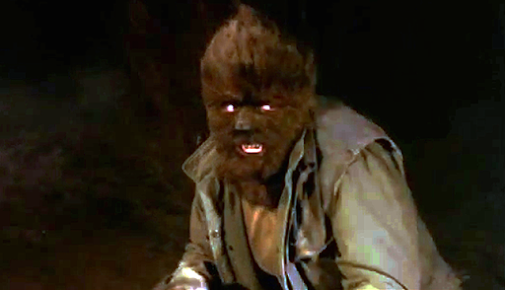 There’s not much in the way of actual werewolves until the end, with an initial attack portrayed either a bit abstractly or just ineptly, as the bikers get picked off one by one at night by their own leader, with things coming to a head as they both transform in front of the gang (conveniently) leading to the film’s fiery climax, which features two dark haired werewolves with a traditional appearance, except we know which one of the girlfriend character because that werewolf has long hair… The poster does not keep its promise of a werewolf on wheels – this does happen at the end, but everything is so dark and poorly edited that it’s impossible to really understand what’s going on. There’s an aimless air to the proceedings which matches the bikers’ lifestyle, and a clear connection to the myth of Circe, with bikers drugged via food by cultists only to be turned into beasts. The finale is meant to be trippy but feels tacked on to simply try ad mess with the audience’s minds. Real bikers used. Local hippies used to play cultists, ironic as hippies blamed for satanism due to Manson family, etc. Technically not great on many levels. I had bene looking forward to this one. That'll learn me... 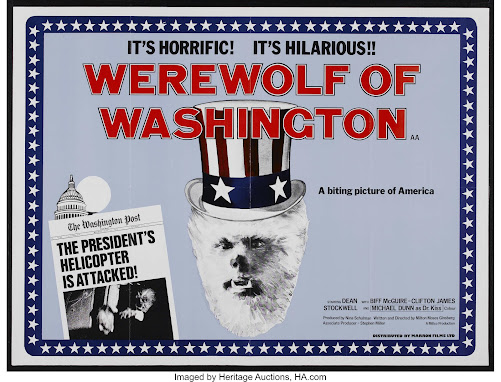 Another comedy, I was positive I had watched The Werewolf of Washington (1973) as a teen but clearly had not remembered much about it. Technically inept, it functions as a satire that is pretty heavy handed, if prescient, treating the ongoing Watergate scandal a good year before Nixon’s resignation. Dean Stockwell plays a press secretary to the US President and is bitten by werewolf while on assignment in Hungary, returning to Washington to become a werewolf who begins to eat and/or maul the President’s enemies. A mostly good cast is squandered on a poor script and direction. The framing during dialogue shots is awful, with a baffling amount of extra headroom above the actors. But it does have its moments, and there are some good performances from Dean Stockwell, Clifton James, and Biff McGuire as the idiotic POTUS. 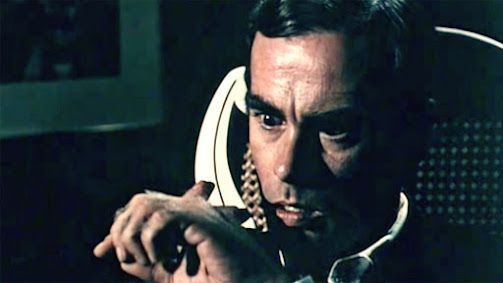 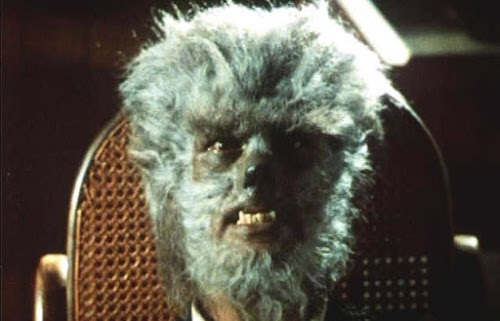 The Werewolf of Washington clearly uses familiarity with The Wolf Man (1941) as jumping off point for it's script, with clear references to original. Stockwell’s werewolf make-up (presented through the usual dissolve transformation) has a bigger, greyer look to Pierce’s design, but it seems to big on his light frame, although this does give his beast more of a light agility. This werwolf is light on his feet, sneaking around and hanging on to car rooftops. 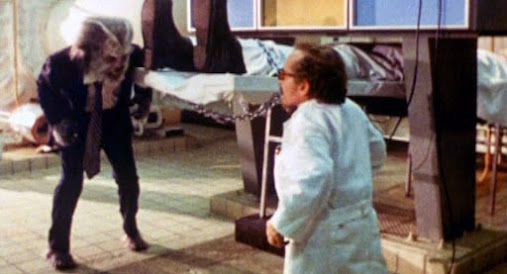 Stockwell has weird but amusing scene with an odd horror homage scene with Michael Dunn as Dr Kiss, a strange scientist who exists beneath the White House, an obvious satire on Henry Kissinger, with suggestion of Frankenstein’s Monster experiment. Stockwell’s werewolf is affectionate towards Dunn, licking him like a dog, but this idea goes nowhere. A cheap, half-baked and wasted opportunity with some garish 1970s interior decoration that’s liable to give headaches; not once does this feel like it takes place inside the White House.

A word of warning about The Werewolf of Washington - it's available to rent or buy on Amazon Prime streaming. Don't. It has to be one of the worst prints of a film I've ever paid to see. Inexcusable qualoty where hardly a thing can be seen. It's on YouTube if you're that curious.