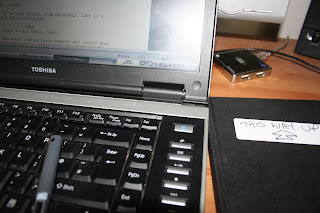 This might seem like a no-brainer to some, but blogging about it gets it clearer in my head, so I beg your indulgence and all that...

In my 2nd Act struggle (mine, not the characters), I'm taking a scene from a previous draft and using what some folks call "deep structure" on it. I'm now seeing its place in the story and looking at it as a sequence, giving that sequence a structure and then breaking it down into structured scenes and beats.

I structured the previous drafts around sequences but this time I'm taking those sequences and giving them a tighter structure themselves, breaking it down to make sure that everything counts and pushes the story forward. This is making it all clearer in my own mind and is veering me away from my old technique of writing reams of notes and trying to glue it all together. I'm taking those notes and trying to be more organised about it all. Otherwise, I reckon I could get lost in it all again and become mired in exposition and historical facts when I need to take every moment and see how it affects my main character.

Wow. That was a bit of a wanky metaphor, but even blogging about it helps me get it clearer in my mind. The other important part is maintaining my patience and not just start slapping the bricks together with too much mortar and then getting in a rage when it all falls apart (As some folks know, I'm not known for my patience).

Basically, the bleedin' obvious become more apparent to me is that Beginning, Middle and End all still matter within a sequence or a scene, as much as within the overall, conventional 3 Act Structure.

Anyway, this sequence is now beginning to excite me, both creatively and from an audience point of view. Moments are now becoming clearer and have more substance to them and I'm enjoying running it through my head.

Let's see what happens...
Posted by Brian Robinson at 13:00 No comments: 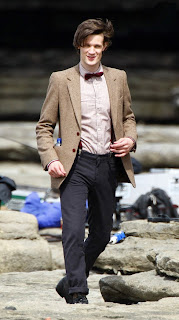 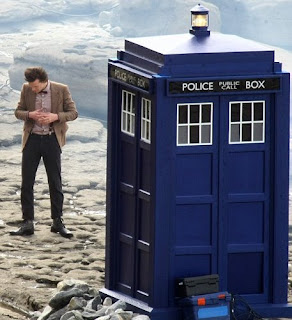 All in all, this looks good to this particular Who fan. Looking forward to seeing Steven Moffat's stories next year. Yay!
Posted by Brian Robinson at 12:23 No comments:

Fellow writer and blogger, Miss Read, posted this movie meme question thingamabob. I've got lots to do, so why not?

1.Name a movie that you have seen more than 10 times.
Too many to mention, but the most obvious candidate for me would be The Empire Strikes Back, but mostly on DVD or VHS. Only 4 times in the cinema, though (2 original, 2 special edition).

2.Name a movie that you’ve seen multiple times in the theater.
Again, loads. I overdose on summer movies I like. I've seen Indiana Jones and the Temple of Doom in a cinema at least 6 times.

3.Name an actor that would make you more inclined to see a movie.
It would have been Harrison Ford in the past (Firewall came and went without so much as a sniff from me), but none now.

5.Name a movie that you can and do quote from.
Usually Star Wars or Aliens. Depends on the company I'm in.

6.Name a movie musical that you know all of the lyrics to all of the songs.
None. But I knew The Sound of Music pretty well as a kid.

7.Name a movie that you have been known to sing along with.
Probably Monty Python's Meaning of Life. But it's not something I normally do.

8.Name a movie that you would recommend everyone see.
Hmm. Probably Sidney Lumet's The Hill or Coppola's The Conversation.

9.Name a movie that you own.
Good god. Where to start? Um, random choice (goes to DVD cabinet and picks one with his eyes shut)...Seven Samurai.

10.Name an actor that launched his/her entertainment career in another medium but who has surprised you with his/her acting chops.
None spring immediately to mind that I like. Maybe Harry Connick Jr? Sinatra was pretty good in From Here to Eternity. And I hate Sinatra and the useless cult around his name.

12.Name a movie that you keep meaning to see but just haven’t yet gotten around to it.
Too many to mention sitting in the DVD cabinet, but I do keep meaning to sit down and watch The Apartment.

13.Ever walked out of a movie?
Yes. Prince Caspian. The first and only time so far - it takes a lot to make me want to do that.

14.Name a movie that made you cry in the theater.
E.T., Dances with Wolves, Jackson's King Kong.

15.What’s the last movie you saw in the theater?
Harry Potter & the Half Blood Prince.

16.What’s your favorite/preferred genre of movie?
Not so sure anymore. Maybe it's still Sci-Fi.

17.What’s the first movie you remember seeing in the theater?
A double bill of the Bugs Bunny/Road Runner Movie and The Seventh Voyage of Sinbad. Baptised by Harryhausen!

18.What movie do you wish you had never seen?
None. I try to get at least a little something constructive from the biggest time wasters and cinematic shit-splatters.

19.What is the weirdest movie you enjoyed?
If I enjoy it, it's not weird.

20.What is the scariest movie you’ve seen?
Alien.

21.What is the funniest movie you’ve seen?
Monty Python and the Holy Grail. This is Spinal Tap and Anchorman get a sniff as well.
Posted by Brian Robinson at 11:16 2 comments:

No, this is not a blog about keeping tropical fish.

Although the two tanks we have do provide more distraction at times (Hmm, write or clean the algae off the tank?)

I'm going over my previous draft, writing out the scene descriptions line by line with the intention of investigating what actually worked and seeing if it can be used in the new draft. But I'm questioning myself over whether this is really just another form of procrastinating or not. I'm just emerging from a rather crap period of avoiding writing and want to make sure I'm taking things in hand and not just kidding myself.

There's so much historical stuff I felt compelled to put in there as I have a real chip on my shoulder about knee-jerk Scottish Nationalist reactions to the Glencoe Massacre and feel I should try and set the story straight - I nearly got into a fight with a friend when I explained the background to the story, so ill-informed are some people. But I feel I have to strike a balance between historical accuracy and telling a cracking adventure romance.

On reflection (about a second's worth as it's bleedin' obvious), what really counts is the actual story of the main character, not splitting the point of view between the players central to the massacre itself - whom should the audience root for? The villain? The misguided Highland Chieftain? No, they should root for the bloody hero, of course! There does seem to be a slightly Hitchcockian element coming through in the new outline for the next draft (I've altered the first half of the story pretty radically, calling for a new outline or I'll trip myself up.) The thing that is emerging now and which is beginning to excite me is what I tell the audience and what I tell the main character, upping the suspense. Hopefully.

It all boils down to knowing who and what your focus is. It's too easy to get bogged down in historical details and drift from the main story, which is what an audience wants to see. Not a history lesson.
Posted by Brian Robinson at 10:06 No comments:

Contrary to reports, I am still here. Well, not reports, just my own sense of guilt at no one really reading this blog.

I have not been trapped in a well with only an aging beetle for company waiting for Andy Summers to dig me out.

I have not been abducted by aliens bearing a resemblance to Tom Petty, asking where this "wonderful Crossroads television signal has gone".

I have not secured a career in the manufacture of rubber cutlery for the fumbling gentleman.

Nor have I been held at spear-point by a disgruntled paper facsimile of Richard Digance.

But I have endured the generally risible Transformers 2, Terminator: Salvation and Wolverine, missed almost all of this year's Edinburgh Film Festival AGAIN (while catching one shorts show and catching a glimpse of one of my all time heroes, Joe Dante along with Roger Corman), spent three weeks without alcohol of any kind and tried to avoid procrastinating as much as possible.

Still, Psychoville is pretty good. Welcome back, Gents. Now, where are the other two?

Managed a trip to Glencoe to see the place I've been writing about all this time. Beautiful and intimidating part of the world and I'll post about that soon.

Will endeavour to blog again.
Posted by Brian Robinson at 16:09 5 comments: