Post from the Past - Origins of an Unapologetic Star Wars Fan

I used to post blogs on MySpace but have since abandoned it for the far less busy and non-spammed Elysium which is this place (hah! not this blog, but this blogger thing in general). But I do have a few posts from the old blog I want to include here as they may help explain me a bit better.

A few posts ago, I wrote about my disappointment in the new Clone Wars film. Some people said "it's about time!" but the fact is that the effect that Star Wars had on me as a kid will never fade away or get jaded, no matter how many Jar Jar's there may be in the world. I saw it at exactly the right age, without irony or cynicism. Yes, there are a lot of things about the new films which are rubbish but they have not ruined my memories. The only thing that could do that would be some sort of blow to the head, and even then I wouldn't know any different. My memories of those screenings are indelibly seared into my mind and have helped put me where I am, which is not exactly where I want to be but it's a start. So here is a post I made about 18 months ago during Star Wars' 30th anniversary. George Lucas didn't rape my childhood. He did something good once and it has stayed with me. This might help explain why I see the good things about the prequels, past the glaringly and obviously bad. 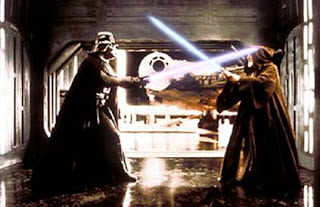 30 years since Star Wars came out (in the US at least. I think it was Christmas in the UK). Where did it all go? Where's my hair going now?

Who'd have thought we'd still be talking about it. Never mind the new films, special editions, cartoons, TV, etc. This isn't about them.

It was a film. It was the film.

What was I doing back in 1977? As if anyone wants to know, but since you're nice enough to read this blog, then why not?

When it cam out in the US, I was almost 4 years old. Almost, but not for about three months. Now, I'm not sure as to what the official line is with regard to when we begin to truly form memories and I'm not about to say that my earliest memories are of Star Wars (more of that scary and fucked up poster of Tomsk from The Wombles above my bed), but I do seem to remember things from that period. A lot of it has to do with my Dad. He loves Sci-Fi and so things like Star Trek, Space 1999 and Doctor Who would be on in our house regularly, and I would regularly hide from them. So it was logical that he'd be interested in it somehow. But that wouldn't be for a couple of months, but more on that later.

Another bit of TV from back then I remember with about as clear a memory as I have from back then was a show called Clapperboard, presented by a guy called Chris Kelly, on ITV. Whereas the BBC had Barry Norman giving his opinions about films, Clapperboard actually showed some of the filmmaking process. So when Star Wars happened in the US and it began to get crazy, they pounced. For me, Clapperboard was all about Star Wars. I remember seeing quick clips of the film, particularly, bizarrely enough, Ben Kenobi's death (or it may have been some kind of sketch on one of those bad comedy shows back then, like Dick Emery or something), which would have been a bit of a spoiler back then, had the term ever been coined by that time.

I remember seeing men with beards making the most complex and real looking model spaceships and filming them. So, as someone who has been involved in filmmaking, it was my first initiation into the actual process of filmmaking - even as a four year old, I knew what a film camera was at a kind of fundamental level.

And there were these amazing characters. As I recalled them back then - Luke Skywalker, Princess Leea, Dark Vador, R2D2, C3PO, The Man, The Old Man, The Friendly Monster, Stormtroopers, the Sandymen.

Don't get technical with me - that's how I knew them when I was four.

Hype grew and somehow, even though I'd never been to a cinema before or actually knew what one was, I wanted to see this. As a 4 year old, my prime mission in life was to see Star Wars. And then I found out my Dad was going to see it - now, I don't know if this was when it screened at the Edinburgh Film Festival (as I believe it did - I could be wrong) or if it was closer to Christmas when it went on general release in the UK. And so I asked.

"But why? Why can't I come and see Star Wars with you?"

"Because you're too young. It'll probably frighten you."

He came back and told me all about it - he loved it but thought that the creature cantina would have been too much for my four year old mind of fear. But I would see it when I was older. For a four year old, that means forever.

My resolve remained. If I couldn't see it, I'd still know more about it somehow. The fuss on TV saw to that. Images and sounds from the film were everywhere. There was nothing like it. Clapperboard and other similar TV shows would have to suffice.

I started primary school the following year in 1978. I was five years old. It was still on. And then the toys came out.

Or, to be precise, the adverts for the toys came out as I wouldn't get any for another year.

Everyone in my class, boy or girl, knew about Star Wars on some level. But it seemed I was the kid who really loved it even though I hadn't seen it yet - I don't think any of us had; most kids' first film was Bambi or Snow White back then. We all spoke about the characters and tried to play it, making the noises as best we could, with all the inaccurate names for the characters still in a slow state of evolution for us. But that didn't matter because these characters were so clear cut that to us very young and imaginative kids it was like sowing seeds in the best soil - our imaginations were as fertile as they probably ever were, unclouded by conscience or remorse or delusions of...oh wait. Wrong film.

Fact is, it practically ruled my life then (my wife would argue that point with regards to nowadays as well). I got my first action figures (Star Wars Men as we called them back then) for my 6th birthday - C3PO & R2D2 along with a Star Wars Transfer Set, followed by Darth Vader and a Sandpeople. I was getting the names right by this stage.

It set so much of my life in motion. I would write about it, or write Sci-Fi stories (it was either Star Wars or Superman for a while). I became more and more aware of the process of filmmaking (as much as a small kid with no access to a camera could back then) and began to learn about who made this film - the guy with the beard. And then about his friend, the other guy with the beard.

I loved the music, which was hard to get a hold of here back then. I had to make do with that shitty disco version by Meco or crappy inferior versions by Geoff Love, et all, until we got the original soundtrack on vinyl. I sat and listened to it with my mum, a rare thing as she had little time for my obsession back then but appreciated the music. It began to give me an appreciation of music beyond Showaddywaddy and Adam and the Ants. To this day, when I'm driving and Classic FM play an adapted version of any movie soundtrack that is not from the original recording, I start off. My wife has too much patience with me. She really does.

It would be a while before I'd actually see Star Wars. I'd read the comic and and novelisation and knew the story inside out - although I was disappointed not to see Jabba the Hutt in it as he was in the Marvel comic adaptation. In fact, Star Wars would not be the first film I'd see in a cinema. That honour was reserved for The Seventh Voyage of Sinbad (pure gold!). Nor would it even be the first Star Wars film I'd see in a cinema.

Word got around very early in the newspaper cinema listings about what was being called Star Wars 2. Clapperboard began running items on the new film. And so it began again.

There were three of us kids by this time and trips to the cinema were very rare.

"Well, it is your birthday soon."

And so my Great Uncle Jimmy (or Uncle Chimney as I called him, for some obscure reason) got me tickets for The Empire Strikes Back for my 7th birthday. And I was simply not prepared for the experience I was about to have, or how it would sear itself indelibly onto my memory for the rest of my life. - so much of what I want to put into my films (short as they may be) or into the scripts I write comes from that day when I saw The Empire Strikes Back.

It was all so hyper-real. The snow, the swamp, the asteroids, Cloud City, all of the sounds, the best movie score to this day.

And I knew more than ever I wanted to be Han Solo.

I sought out everything I could about the film. I'd eventually see Star Wars in a double bill with Empire - everything I wanted it to be, but the seed for liking the darker aspects of it all had already been sown by this time. We all had such a good time as a family at the double screening that my Dad took the corners tight on the way home, making spaceship noises and claiming we were all in the Millenium Falcon.

The action figures kept coming, my parents put up with it until after Return of the Jedi and eventually, after a long time, thought that maybe I could learn to make movies at university (after movies made at school with friends. Violent films. Very violent but funny films which got banned by our teacher. Heh). My family was really proud at my graduation ceremony and at the other bits and pieces I've done. And the ambition still burns deeply.

All because of a film my Dad refused to take me to see.

Sounds a bit like I'm harping on as if it means something to others, which it really doesn't as I'm just another film student / wannabe / trying to get there persistent bugger.. but it was so important to me and still is.

We went to see The Empire Strikes Back on my birthday - me, my Dad, his pal Stewart and my little brother, Sandy, who was five at the time but has always been bigger than me, even then (I was very small and skinny).

My Dad initially refuesed to take me to see Star Wars on the grounds he thought it would scare me.

The lights go down.

The words "has dispatched thousands of remote probes in the far reaches of space..." fade into infinity.

Camera tilts down to reveal the massice Imperial Star Destroyer in space.

And a strange sound comes form my left.

My little brother, bigger than me and next to me, is hiding behind behind the seat, say he wants to go home. Absolutely petrified. Mt Dad calms him down.

And I sit in jubilant silence.