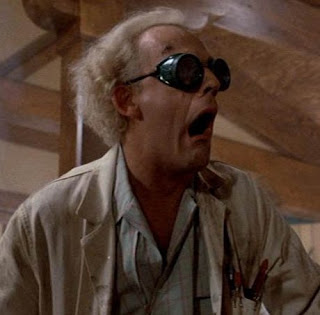 I've been absent. So here I am, blogging but never sure if said absence is noted. The blogsphere still remains a bit of a mystery to me (it also makes me think of the Vogon home planet in The Hitchhikers Guide to the Galaxy).

A slight catch up.

Still writing but hopefully entering my last week at my present revision. Eager to get on with my other ideas and to take this present project forward in some form or another. I have a couple of short ideas I want to write and film and two feature ideas brewing away, all horror but varying a great deal in tone.

Just spent a week in Crieff. A nice break, less deserved for me, more deserved for my wife. She has another week off while I put my nose back to the grinder and hope to shave it down to a bit of torn gristle (yep, I've got an urge to write some horror). There may be some pics about in a subsequent post (not my imaginary mauled nose, our week away). And we shot some arrows and watched all of Heroes series 2, leading into the new series. A bit Heroed out now.

But today held a nice little event when I attended a friend's birthday gathering, involving a cinema screening of Back to the Future. Absolute gold. It still holds up wonderfully, even after 23 years - yikes! The last time I saw it in the cinema was New Year's Day 1986, with my brother. In other words, a loooooooooong time ago. The print was an original from 1985, with a few bits missing; apparently, some projectionists steal frames of iconic moments, which may explain the poor state of the BFI's print of Jaws, which I've seen three times in the past 13 years and has some sweet moments ruined by some missing frames. The last time I tried to see it, the screening was cancelled as the cinema thought that the print was unshowable A shame. But Back to the Future was mostly intact save for some understandable messy segments at the start and tail of each reel and the odd few frames missing. Biiiig rounds of applause at certain moments and I was surprised at how much more detail I was able to pick out in the shots, surprising considering I've seen the film many times on VHS and DVD.

But, major thanks to Laura (who I owe for the ticket - such is the life of the writer - skint), whose birthday it was, for putting on a superb flick to celebrate her birthday. There were even a couple of Doc Browns and Laura herself was dressed as Marty's mum from the Enchantment Under the Sea dance. Amazing the love people have for films like that. As much as I adore Star Wars and Indiana Jones, I'd likely not get dressed up for a film screening.

OK, I admit it, I did get dressed up as a very cut price Indiana Jones for a fancy dress party last year. 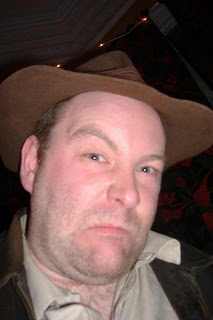 My apologies for any distress caused. But that's the only time, ok? I said ok? Stop looking at me like that.

Why do I always have to gurn unattractively in just about every picture taken of me?
Posted by Brian Robinson at 22:23