Satisfy Your Taste for Adventure!

Well, I found out why. 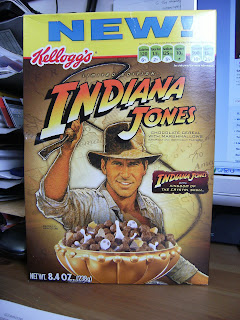 It's no secret I'm nuts about the Indiana Jones movies - ALL of them (yes, there were big flaws in Crystal Skull, but they were outweighed by the good). I've got the soundtracks, I'll be getting the expanded soundtracks, I've got the DVDs, even a couple of Indy figures. Temple of Doom was the movie which actually made me clearly decide that I wanted to make films.

But I never had the movie cereal.

My friend, who sent this to me, is though. He's got an unopened box of C3PO's somewhere - hell, they're probably dangerously explosive by now - and has a knack for spotting strange collectibles sometimes. Ordinarily I wouldn't really look twice at these but he saw them and thought of me. Awww. The box is American and I don't know if these have been bought in the UK or not. If they're imported, then again, Awwwww. 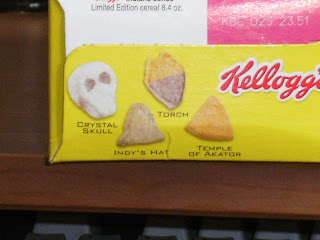 They're the kind of typical marshmallow cereal I've never had and would give Jamie Oliver a sudden and fatal heart attack on sight, but I'll give 'em a try. I'm not one for hoarding things in boxes. My Star Wars collection is all opened and out the boxes. There are little Crystal Skulls, Fedora hats, torches and Temple of Akator shapes in it. Might be fun, considering my usual cereal is Bran Flakes, with the occasion bowl of Crunchy Nut Cornflakes.

As a result, I'll link to my friend's shop website. He runs a couple of video rental shops in Oxford, one of which specialises in comics and has loads of cool autographed photos on the walls, including Burt Reynolds and Sam J. Jones (Dino DeLaurentis' Flash Gordon from 1980). Go see his cool shops.

Thanks Jon!
Posted by Brian Robinson at 11:56