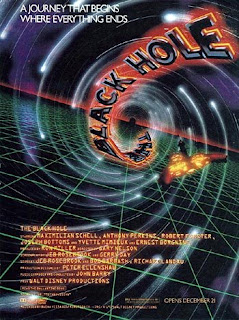 "Something caused all of this to happen. but what caused that cause?"

I felt the urge to revisit an old film from my childhood (What? Again, you say?) after reading Edgar Wright's blog on The Black Hole recently. And conveniently, it was on TV a few days later. I had to record it and so only managed to see it again a few hours ago.

My memories of the ending and its traumatisation of my little mind are just as intact.

I strange one, The Black Hole is. It came hot on the heels of Star Wars (yes, that film again), along with dozens of other cash in films in the late 1970's and 80's. As a result, it was sold that way. Naturally, it being a Disney film, it was aimed squarely at kids. It had the prerequisite kiddy appeal characters - the robots V.I.N.C.E.N.T. and Old B.O.B. (voiced by Roddy McDowall and Slim Pickens respectively) clearly intended to latch on to the cute robot craze revolving around R2D2 and even harked back to 20,000 Leagues Under the Sea, with Schell's Reinhardt as a their Captian Nemo. Lots of action Robert Forster and Joseph Bottoms as Han Solo kinda guys blasting evil robots left right and centre - easily done as the Sentry robots made Stormtroopers look like SWAT marksmen. Yes, lots of adventure in the far, distant reaches of space.

Until about 10 minutes from the end.

Often, there are things which can scare kids for the strangest reasons. Sometimes they're meant to. Sometimes they're not. The latter certainly seemed more prevalent in the 1970's - that's why we had sofas then. In the case of The Black Hole, who knows? What matters is that after the fun adventure where our heroes seem to escape from the mad scientist, the demented spirit of Hieronymus Bosch seemed to seep into things. At the end of the movie, a meteor storm causes the USS Cygnus to lose control and start to fall towards the Black Hole, falling apart in the process. The laws of physics are also torn asunder by the script as Joseph Bottoms looses his grip and starts to float off towards the Black Hole, rescued by V.I.N.C.E.N.T., whose floating function would appear to better the most powerful pull known in nature. That and the fact that floating off into a vacuum has no side effects on Bottoms' character. But, hey, it's a kids' film, these things don't' matter.

So I kept telling myself, it's a kids film, it's a kids film, as Dr Reinhardt, floating in space/the Black Hole/hell flips up into frame, hair like rope, eyebrows and beard even bigger than before, mad eyes darker. A tiny bit of pee might have come out. I'm not sure. But I'm sure about the cold shiver that went down my spine at this, as he seemed to meld with Maximilian into one being, while the humanoid robots wander about in the hellish landscape of fire which Maximilian seems destined to rule.

These images, played alongside some of the creepiest music John Barry has every composed, absolutely petrified me and yet fascinated me. That, along with the V'Ger flyover in Star Trek - The Motion Picture (with the creepiest music Jerry Goldsmith ever composed), still creeps me out to this day.

And this is a kids film?

Well, at least the good guys seem to be spared eternal damnation in the Black Hole as it appears Hell is on the way to Heaven, or so the glittering archways (reminiscent of the hallway in the Emerald City in The Wizard of Oz) and apparent angel would indicate. And then, here they are, out the other side heading towards a planet with a sun rising behind it. But, my now fractured mind thought, where the fuck are they? I had just been exposed to the creepiness of the hell landscape in the Black Hole, this planet they're heading to could be a gas giant or have an atmosphere of hot gaseous lead. But, no, it's a Disney film, I reminded myself. They're fine.

Where this came from or what it all meant is up for debate in a pub somewhere, populated by 30something geeks, like me perhaps. I did hear that the end came about because it simply hadn't been written in time for filming and the FX guys and director just went for it. It's certainly not the ending which was featured in the novelisation of the film (church jumble sales in the early 1980's were goldmines for lunatics like myself). I flipped eagerly to the end where the main characters who appear to escape in the film, are actually compressed into one single entity, retaining a joint consciousness before being spread out into the universe as billions of particles of matter, making up new stars and planets. Just as mad, but a bit more sci-fi than the film. Not as much fun either.

The thing about The Black Hole is that there are some great visual moments in it. Like the giant hot meteor rolling down towards the heroes (more physics guff), well before Harrison Ford's jaw dropped in South America. Some of the production design is impressive as well, or at least seemed so to me back then, the bridge of the USS Cygnus a huge, almost Ken Adam style set lined with hundreds of multi-coloured squares of light.

John Barry's score is also great, very haunting and at times malevolent. He would do the same thing for the appalling and therefore great fun Italian Starcrash a few years later. Strangely endemic to Disney films of that era and before, The Black Hole also seems to have that strange tinny dialogue I remember coming from the Herbie films and Jim Dale in some clip on Disney Time, some forgotten Bank Holiday. The whole film, apart from one short bit in one scene, is looped and everyone seems to sound like they're talking loudly in a tin can. Strange. Even Mary Poppins sounded like that. At least it was one way of telling my young self that it was a only Disney film.

Another fine thing The Black Hole gave us was the long overdue immortalisation of Ernest Borgnine as an action figure, both small and 12 inch. 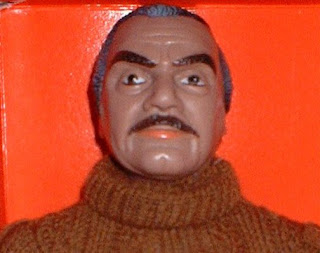 Airwolf never managed to do that, did it?

Now, to try and get my hands on Something Wicked This Way Comes...
Posted by Brian Robinson at 19:24