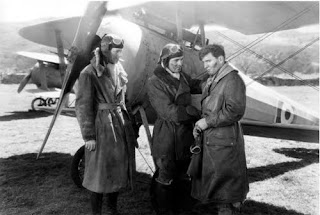 My Hawks Hunt continues with The Dawn Patrol.

I did not expect to like this film as much as I did. In fact there were moments I simply loved. Hawks' first Talkie tells the story of two friends in the First World War as they fly out on bombing sorties in bi-planes over war torn France. The Hawksian theme of brothers in arms and male friendship is apparent from the get go. Richard Barthelmess and Douglas Fairbanks Jr play Courtney and Scotto with what appears to be real warmth. The sense of camaraderie is convincing amongst the men as they face death in the sky with each other, none of them knowing if they'll ever return each time they take off. The men drink (a lot), laugh and sing songs in their makeshift little bar at the airfield, waiting for the next batch of orders to be delivered by Neil Hamilton's Major Brand.

Brand and Courtney are points of antagonism for each other; Brand is a ball of anxiety, receiving orders, under protest, from the higher ups that will send young and inexperienced pilots out to their likely doom. And he has to deliver these orders personally to the squadron, led by Courtney, who does not realise Brand's own conflict over it all and subsequently a huge rift exists between the two men. Mention is made of them falling out over a girl in the past, but this seems unnecessary and is rarely if ever mentioned again. All we need to know is that Courtney thinks Brand is sending these kids out to die himself and hates him for it. Until the tables are turned and Courtney finds himself on the other side of the desk when Brand is promoted. Which in turn leads to a rift between Courtney and Scotto. Circles and circles...

One of the main things that struck me about this was the performances. And subsequent reading up about the film has filled me in. There is a natural feeling to the three main performances. I've only seen Richard Barthelmess once before in Michael Curtiz's The Cabin in the Cotton and I did not like him in that at all; let's be honest, it's really Bette Davis' film. And so when he appeared in The Dawn Patrol, I sank a little. But he's great in it. I've since learned that Hawks actually had a little trouble with the studio over the performances not being...well, loud and stagey enough. It seems that the world was used to and expected over-acting and non-natural sounding dialogue and Hawks received studio notes suggesting that no one would believe the film or its performances. They were dead wrong and the film received an Academy Award for best story.

Douglas Fairbanks Jr has come in for a little stick about his performance but I liked him. He lent the proceedings an air of needed joviality at times, with a hairdo that preceded Jedward by some 80 odd years. I've not seen colour pictures of Fairbanks from the period, but something in me says he had red hair during this time. Just an odd and pointless observation from me.

I;d only ever known Neil Hamilton from somewhere else and it took me some time and brow-furrowing before I realised he played Commissioner Gordon to Adam West's Batman in the 1960's. I don't know if he was trying, but there seemed to be a slightly Scottish lilt to his voice. The other accents in the film vary, with no one truly trying to do any sort of British accent except for the actual Brits onscreen. But the dialogue did seem geared toward that, without going over the score with any "Tally ho's"! One performance that did stick out was William Janney as Scotto's doomed younger brother. He was simply rubbish. The gee whizz factor emanated from him like nausea inducing sun rays.

Obviously, the major selling point of a film like this is the aircraft action. And in fact it took a while for that to really kick off onscreen, and with good cause. Even though it's clear Courtney is the main character, when the planes take off, we stay with Brand, anxiously downing drinks with his head in his hands, waiting for the sounds of the returning planes, counting them in. These were effective moments, boiling the weight and responsibility on Brand down to pretty intimate moments of a man counting the deaths he feels responsible for. And when Courtney takes over, we already know what he's in for.

Great shots of the rickety planes taking off, landing and crashing lend it all a sense of authenticity that is only broken by the fact that the airfield seems to be amongst the scrub of the Californian desert and not Northern France. I love the back projection shot, mixed in with the footage of the aircraft. I don't know, I just like back projection. Even James Cameron got away with it in Aliens. A beaut tracking shot of the planes as they prepare to take off lingers in the mind, Hawks love of aircraft very evident. And the fragility of these planes also comes across as they bounce back to the ground, offering the men inside a brittle security. But Hawks does not concern himself with the politics of war, just the lives of the men who fight it. In that respect, it reminds me at least a little of The Hurt Locker.

All in, a thrilling and compelling take of the realities of those who dare and do. Loved it.
Posted by Brian Robinson at 20:24