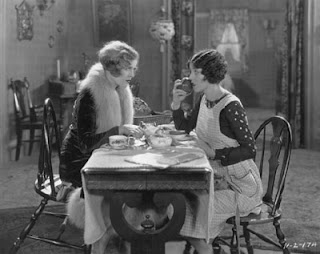 I wasn't able to get a hold of Howard hawks' first film, The Road to Glory (1926), as it seems it doesn't actually exist anymore.

So, next on the list is Fig Leaves, produced in the same year as Hawks' debut. Unfortunately, and as can be the case with silent films, I've only been able to see about the first 30 minutes of what looked to be an amusing battle of the sexes comedy. And I'd better get The Flintstones references out of the way before I carry on; just about every article I've read in the film so far makes mention of the obvious connection. The film is book-ended with scenes set millions of years ago featuring Adam (George O'Brien) and Eve (Olive Borden) dressed, naturally enough, as cavemen. But no primitive fires and huddling in wet caves for this pair - life is lived in much the same way as it is during the film's contemporary scenes. Nice little gags involving coconut-dropping alarm clocks run by sand instead of clockwork and buses pulled by dinosaurs (large scale mechanicals by the look of it, or with performers inside). Yes, yes, yes, so far so Flintstone. I wonder what Hawks' reaction to Hanna and Barbera's cartoon was. Quiet amusement, I imagine.

The prehistoric scenes frame a modern day story (1920's) about a very similar couple, also named Adam and Eve and played by the two leads mentioned above. Eve wants to go out and work, but he's having none of it. Arguments ensue and slithery, serpent-like characters neighbour Alice and fashion designer Andre appear on the scene, each plotting to steal Eve and Adam respectively for themselves. Alice's devious nature is already suggested by her original appearance as the serpent in prehistoric Eve's life but, instead of tempting her, they gossip.

That's about as far as I was able to get given the limited scenes available to me. Themes about the predictability of the attitudes of the sexes to each other and their particular wants and desires are presented in ways very much of their time but Hawks' general representation of women throughout his career is established early on here, an example being Adam insisting on a seat on the dino-bus from a young lady (what a gent!) and her subsequent "We'll get our rights one day" line. If anything, the men do appear dafter, including the Troughtonesque Heine Conklin as Adam's assistant, who provides some laughs in a scene where he tries to convince Adam to get firm with his woman and squirms away when Eve shows up.

But the most Hawksian element, even in a silent, is the quick fire dialogue. We don't always hear what they saying but we know exactly what it is, regardless of the title cards. And Hawks also has some fun with his cards, giving a drunkenly childish Adam a great visual moment by playing around with the font. I actually laughed out loud at one moment where Adam, in response to Eve mentioning a fig leaf sale, replies, "Somehow I can't get hysterical over that".

A funny little film which I like to see the rest of sometime.
Posted by Brian Robinson at 21:50