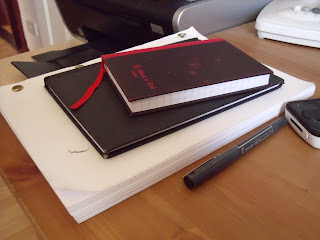 Back from our holidays (a while now, but away from the blog even longer) and getting back to it. Y'know, writing. For no money. That old chestnut.

Concentrating on one thing for a long time often makes me forget about the other stuff I have to do. Come on; I'm a man! We're only supposed to be good at doing one thing at a time.

This, of course, is a load of bollocks.

But, I find myself in limbo and realise I have to pick my arse up and get on with things. The feature script I've been working on for the past 18 months is in the hands of The Powers That Be, which means I have to bide my time. Up to a point. In the meantime, that old nemesis of mine - discipline - has reared its not-as-ugly-as-I-think head and I'm getting on with other things. This is the first time in a while I've been able to devote this much time to my own spec stuff. I'm getting my portfolio up to scratch so I'm going over an older script and revising it, choosing other ideas to turn into outlines and writing one of them into a full blown first draft. This one is an ghost story that's been floating around for nearly 10 years now so I have copious notes to get through. I expect to squirm and cringe at some of my older writing. But the idea still excites me so there must be something there amongst my aged scribblings.

I'm getting on with trying to write outlines and selling synopses again - not an easy task, but there are hints and tips out there.

And I now remember that it's enormous fun doing my own thing again - writing stuff I want to go and see myself, which is one of my most important rules. My present material consists of different genres, some same genre stuff with wildly different tones and just plain old lunacy.

So, I'm firing up the movie scores on my hard drive to aid with the old inspiration thing (a bit of Indiana Jones and the Temple of Doom, I reckon) and getting down to it again. Time to lose myself in my head. Which is ironic considering how much I was told not to as a kid.

As fellow blogger David Bishop would put it, "Onwards!"
Posted by Brian Robinson at 11:35