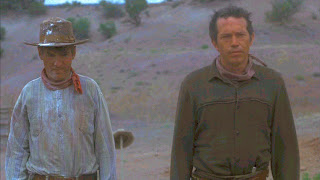 I said a few days ago I was going to blog about Monte Hellman's The Shooting, which I recently watched.

The semi-randomness of LoveFilm led me to this film. I've been wanting to introduce myself to the films of Monte Hellman for some time so I did the necessaries on LoveFilm and The Shooting came through the letterbox first.

I'd never heard the term Acid Western before I checked up on the film after watching it (in fact, the term wasn't coined until almost 30 years after the film was made). I was already impressed by the film but on discovering the term I re-evaluated the film in my head. It's an interesting idea, to turn the conventions of the Western around to make a counter-cultural statement without actually making the film seem to out of place within the genre (in my mind, at least).

I was aware I was watching a low budget film when watching, but this seemed beneficial onscreen. The whole thing has the feeling of a descent into hell. Almost dreamlike. The small cast and the way the landscape is shot help with this impression. The choice of location makes the characters feel more and more isolated from reality - it seems similar and yet utterly opposed to John Ford's West of Monument Valley. The heat and dryness are emphasised both narratively and visually. Warren Oates character of Gashade also becomes increasingly isolated throughout the film, as he is separated from his sidekick, the well meaning buffoon Coley, and then from his horse. The desert claims the horses, one by one, aided by Millie Perkins unnamed mystery woman as she insists on riding to death every horse she has. We don't know who she is or exactly why she wants what she wants; only that she is out for revenge and when the opportunity arises, her victim is Gashake's identical brother (it's never explicitly stated that they are twins).

This sudden ending, of course, is what really marks the film out from conventional Westerns of the time. The slow motion serves to emphasise the face both brothers share - how much of this is metaphorical? Is this just about Gashake? I'm unsure but it certainly made me question just about all that had come before. The rising hostility of the woman towards Gashake and Coley increases as they become more distant from their mine. She becomes more unpleasant, demanding and obstinate, where in the beginning she hired Gashake due to his past as a bounty hunter (something he seems keen to leave in the past). And when Jack Nicholson finally appears after trailing them for some time, they both assume the role of pure antagonists against Gashake, eager to separate him from Coley, his guns and his horse, although Nicholson loses his own horse, levelling the ground somewhat.

Warren Oates is just superb as Gashake. He knows all is not what it seems but goes along for the money. Or has he? A sense of guilt or resignation hangs around him and Oates plays it all with a genuine stoicism. I wasn't keen on Perkins at all, though. All shouty and mono-expression, she seemed more at home in a Bresson film. Nicholson was a slick and genuinely menacing bully.

One moment that lingers is when Gashake and Coley (Will Hutchins) hear the gunshot signalling the arrival of The Woman. Coley gets such a fright he runs as fast as he can to a high point, carrying an open bag of flour, spilling as he runs. Then panicking child-like man covered in a cloud of white powder.

One unresolved element involves two men, shown only by their boots, who arrive at the mine camp after the group has left, as though they are also after someone.

This is no ordinary Western and I'm eager to find some more in a similar vein. I've been tipped off about Jan Kounen's Renegade (an awesome cast list!), but there's more Hellman to get through first.
Posted by Brian Robinson at 20:53