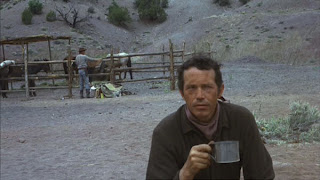 These are the things we deal with sometimes.

I watched my first Acid Western film tonight, The Shooting*. It was also my first Monte Hellman film. It's late now but I'll blog about it tomorrow.

But Warren Oates was superb.

On another more jolly note (jollier than last week's bout of shit), my wife and I are off to see Monty Python this week! Well, four of them. No, Cleese isn't dead but he's not coming. Spoilsport. But, to make it even better, I hear Neil Innes and Carol Cleveland will also be there. While I hated Spamalot, I'm looking forward to Eric Idle's He's Not the Messiah oratorio.

Yes. There is a Python oratorio.

Our seats'll be shite but we don't care!

I once walked past John Cleese across the road from Harrods, a few years ago. He glared at me and truly is freakishly tall. Met Palin and Gilliam in years previous. Nice gents.


*I've linked to the Wiki page instead of IMDB as there's more interesting information there.
Posted by Brian Robinson at 01:41