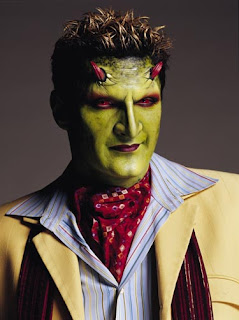 Two obit posts in as many days. Bugger.

Some folks might not have known who Andy Hallett was, but as a fan of Angel I knew him as the demonic host Krevlornswath. Or just Lorne, the flamboyant and showbiz nightclub owner. Angel seems to have been the dominant part of his tragically short acting career and he always lit up the episodes he appeared in.

He'd had heart trouble for some time, apparently, but you'd think that we'd be medically on top of this sort of thing these days. Poor guy. I may have to watch There's No Place Like Plirtz Glirb, one of his best episodes of Angel, later today.
Posted by Brian Robinson at 12:48