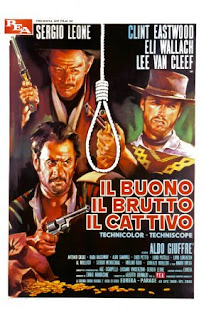 Saw a digital screening of The Good, The Bad & The Ugly yesterday. I'd never watched the entire film before and I'm so glad I kept that experience for the big screen. Absolutely brilliant. Leone's use of close ups is just fantastic and the first 10 minutes or so of the film have no dialogue, over two scenes - Lee Van Cleef's entrance and subsequent meal with his target is gripping. Fantastic frame compositions, particularly in the first hour of the film (almost painterly, particularly when Angel Eyes interrogates Bill Carson's girl and when Tuco arrives back at his gang's subterranean hideout).

One thing which really struck me was that while Clint Eastwood is the most recognisable and commercially exploited figure in the film, this is really Eli Wallach's film. He's it's star, to me. Tuco is in the majority of the scenes and Clint's Blondie always seems to be orbiting Tuco somehow. God bless Eli Wallach. The man is in his 90's and is still acting regularly. He and Ernest Borgnine should get cast together in something.

Beautiful digital "print". The few scratches seemed to originate on the fairly clean print used for the transfer, but the graininess of the optical titles and transitions was more noticeable. But lovely, nonetheless. It's nice to see a classic movie in a cinema without the overt scratchiness associated with the change of reels. Here's hoping the Edinburgh Cineworld keeps up it's Monday Classic screenings in future, although there seems to be nothing scheduled for next week. DVD is convenient, but these films should be seen in a cinema.
Posted by Brian Robinson at 13:03