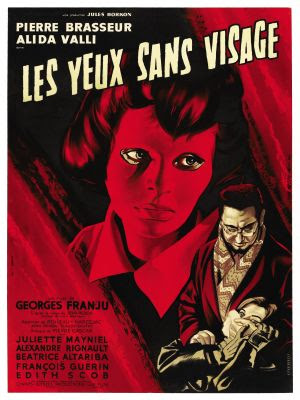 Director Georges Franju said that his 1960 production of Eyes Without a Face was not a horror but was more concerned with anguish - this is understandable. I don't think horror can ever be defined into a hard category. The range of human emotions, which horror cinema taps into perfectly, is too broad to let itself be defined in narrow terms. Cheap scares and a night spent picking up spilled popcorn from jump scares is all and well but I find the best horror films are the ones that get under your skin (if you'll pardon the expression) and play with our pre-concieved notions about what it means to be human and how we face mortality. Like any literary genre, a film genre should always look to push its own boundaries, both in terms of shock and emotion and in it's exploration of ideas. Eyes Without a Face looks to mythological and fairy tale imagery. I can't help but think about Guillermo del Toro when I watch it.

Eyes Without a Face is fantastic.

From the wordless opening, where Alida Valli drives her lifeless passenger (revealed to us as she moves her rear view mirror) to a watery grave, accompanied by Maurice Jarre's twisted fairground parody (in fact, this theme accompanies Valli whenever she's up to no good in the film), like a helter-skelter slowly descending into a distant hell. Jarre's score is wonderful, used sparingly (a complete absence of music during the Doctor's final scene is powerful) and clearly features musical snippets he would return to in Lawrence of Arabia and Doctor Zhivago, Christiane's sad theme in particular. 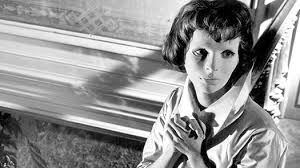 The anguish comes from both Pierre Brasseur's obsessed doctor and his disfigured daughter, Christiane, whom he hides from the world, her face hideously damaged by a car accident. Doctor Genessier has sent his secretary, Louise (Valli), out to abduct young women so he can remove their faces in an attempt to give his daughter back her beauty. He is a man driven by a quiet anguish and a scientific determination, like all the best villains, the protagonist of his own story. He wants his daughter returned to him, as he managed for Valli in restoring her own face. Valli is almost the Fritz/Igor to Brasseur's Frankenstein, as she sets about her grim tasks with unquestioning loyalty and a lack of anything resembling morals. The good doctor and his assistant are a bit underwritten - her loyalty to him and the absence of Christiane's mother might suggest a relationship between the two but it remains unexplored. This is not to say that their relationship should be so, but they do seem a bit flat in that regard, Louise especially. Is her loyalty to him (and therefore willingness to commit terrible acts) simply out of gratitude? In this respect, she seems worse than him. He seems to act out of love for his daughter (twisted and morally corrupt as he clearly is) whereas Louise only shows any sense of fear or guilt near his family tomb, focusing on a passing plane to drown out the noise of his digging. Even Dwight Frye's Fritz was a willing digger for Henry Frankenstein. Her apparent lack of morals is odd and Franju even gives Doctor a chance at sympathy with the audience through his care towards the patients in his hospital. However, anyone who experiments on animals is a c*nt, in my book. Through and through. His demise, reminiscent of the fall of Doctor Moreau or Dr Frankenstein in James Whale's classic, is fitting. 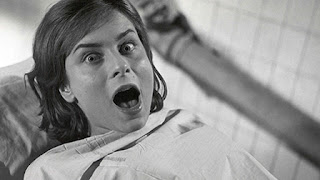 Franju was skirting a fine like with his treatment of the actual tissue graft. This film was made in 1960 and the scene of skin being cut and visibly lifted from a character's face must have been shocking at the time. It still made me squirm somewhat, even if the face on the move does look a bit white and rubbery. It's bold stuff for its time. I've read that some critics derided the film as disgusting but the sense of quiet desperation and, indeed, anguish is palpable through the film. Horror shouldn't be afraid to play on emotions other than straight fear. 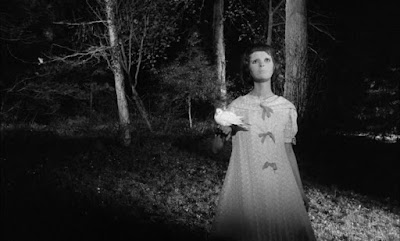 Edith Scob's Christiane is kept mostly behind a mask, seemingly cast from the actress' own face, so natural does it appear. Her sad visage is truly haunting and at times is one of the saddest images I've seen in a film for a long time. She moves like a ballet dancer (as noted by my wife) and her first scene features her dressed in a long raincoat, buttoned up to her neck. She appears doll-like not only in her face but her entire being. Even the scenes where we see her new face, her face exhibits an otherwordly yearning with those giant, sad eyes. Her final scene, accompanied by white doves, is reminiscent of Snow White but far sadder and consumed with a despairing madness. It's an image I'm not going to forget in a hurry.
Posted by Brian Robinson at 00:19