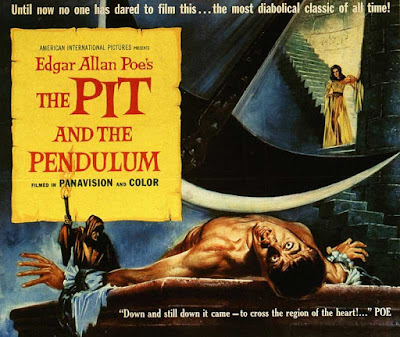 Yep, I'm aware it's the 2nd of October. But we kicked off October horror last night so I'm writing up this post a day later. And so what did we (my wife is in on this) choose to get things going? We went with some classic Vincent Price. Some of his most famous work was with the legendary Roger Corman and their Edgar Allan Poe series. Fopp have a cracking sale on at the moment and I snapped up a bunch the recent Arrow Corman/Poe titles last week. I like to try and go in chronologicla order with these things so The Pit and the Pendulum (1961) was the earliest of the titles I bought.

The image of Vincent Price hovering maniacally nearby while said pendulous blade swings back and forth, close and closer to our hero's torso is an enduring one but there is a lot more to the film than just that. Price's character, Nicholas Medina, begins as a mysterious but ultimately sympathetic character, wracked with grief and eventually misplaced guilt at the loss of his wife, Elizabeth, played by Price's equal in horror, Barbara Steele. Along comes Elizabeth's brother, Frances, looking for answers upon receiving the terrible news. Of course, nothing will seem as it appears on his arrival.

John Kerr plays Frances sporting a permanent pouty frown, whose only other expression seems to involve opening his suspicious eyes wider every now and again. It's difficult to give a toss about him, particularly once the now insane Nicholas has him strapped beneath his monstrous pendulum (oo-er missus). This in stark contrast to Price's performance, which drives the film, ranging from quiet dignity in his grief to bug-eyed histrionics, especially once certain forces begin to finalise their plan to drive him mad. Price's entrance into the film is a great sudden close up when he bursts out of a secret room, uttering the demand, "Who are you?" to Kerr's new arrival. It's this adulterous plot that is revealed in the film's final act, set up to mirror the awful fate Nicholas' father set out for his own wife and her lover. Seeing as it didn't go so well for them, surely the effort to drive insane a man obsessed with his murderous father rates among the poorer plots in horror? Nonetheless, Price duly takes up his character's new outlook with suitable aplomb, as he slowly lowers the pendulum in an attempt to slowly bisect Kerr's Frances - cases of mistaken identity jump around as one person dies only for Price to believe that the next live soul is the same target. He manipulates the awful device with such glee that he could be twirling his ever present moustache while Kerr writhes tied up to a trainline in an old silent. He's marvellous and his performance is a solid reminder of the pathos Price could give us, albeit on an exagerrated scale here. 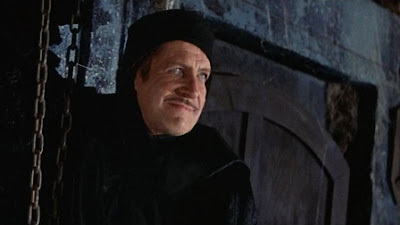 Luana Anders does fairly well as Nicholas' sister, a role that begs for development. Of course she winds up with Frances, but who cares? It's not that Price just dominates the screen, but that her role as sister isn't all that believable. Her eyebrows, on the other hand, would give Kim Novak's in Vertigo a run for their money; they're just odd. Antony Carbone lends the proceedings a slightly more jovial air early on while Barbara Steele, not onscreen all that long, makes her presence well and truly felt, those big eyes exuding evil and fear in equal measure. She's great. And the reveal of her character's "corpse" is a stunner. However, and this is spoiler territory, the actual identity of the corpse is never given once certain reveals have taken place. Who's desicated husk is that? One of the film;s plot mysteries, along with the disappearance of the maid, Maria. She doesn't disappear in the story, she's just forgotten about.

Corman had been offered the chance to do a Poe adaptation after growing tired of delivering black and white double features for American International. "Give me twice the money and I'll do a far better one in colour," or something like that (not a quote). After kicking off with The Fall of the House of Usher (1960), he moved on to The Pit and the Pendulum, working with a script from Richard Matheson, who took Poe's short tale and gave the horrible scenario an actual story. Corman retained Price after Usher, as the men seemed to enjoy greatly working with each other. Their continued association developed over several more Poe adaptations. 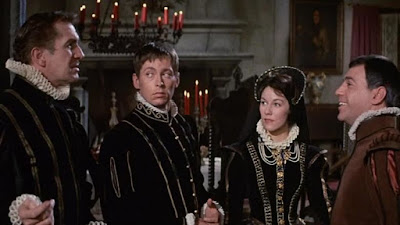 Corman is on the record, I believe, as never having watched a Hammer film before production on Pit started and yet he and the UK studio's features have much in common visually. The great house in which Price lives is rendered well; several beautiful matte paintings represent the exterior of the ominous castle, composited/printed next to a wild and dramatic shoreline. The interior is vast and ranging, taking a switch to the weird in the dark dungeon at the end where said pit and pendulum reside; expressionistic paintings on the dungeon walls show dark hooded figures with red eyes standing in cold judgement combnined with sharp rocky lines Not confined to a location such as Bray studios' Down House (filmed from every concievable angle by Hammer for countless productions), Corman occupies visually similar territory but is freed up by the studio space, allowing for some nifty camerawork and some great whip pan edits, both horizontal and vertical. The flashbacks to the gruesome fates of Nicholas' mother and uncle are done in monochrome, messing around with tilted angles and contorted imagery. It's marvellous stuff, along with the opening and closing titles which mix multi-coloured paint and oil to give us more than the expected scarlet of blood. Corman also brings in rectangular irising, giving us final glances at the terrified eyes of torture victims and some intially odd optical zooms in to Kerr on the torture table that somehow do work to increase the tension - there's something about the increased film grain of the optical zooms that succeeds for me.

There is a sense of tragedy running through the film, with Price's grief and ultimate manipulation at the hands of deceptive lovers driving him over the edge. The image of Price dressed in black robes and skull-hood is an enduring one but upon viewing the film his villian is ultimately tragic, created by the lies and desires of worse people. A wonderfully dark tale slightly diminished by the two dull romantic leads and keeping the titular death device only until the very end. Call me sick, but I really wanted to see more of the dreadful device in action. John Kerr had to wear a metal band around his waist when they decided that the rubber blade just wasn't enough and a real metal pendulum was brought in. Stoic sod.

Coming tomorrow, a double bill: Christopher Lee mingles with Barnard Hughes in The Lost Boys & Theatre of Blood.
Posted by Brian Robinson at 00:34