Is Peter Sellers alive and well and aiding Michael Jackson in his career revivial/farewell/last gasp before his slide into obscurity? 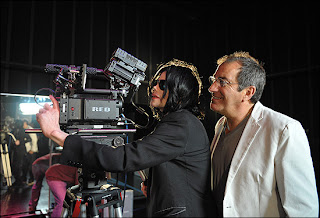 Well, no. But the director of the High School Musical films, Kenny Ortega, certainly bears a resemblance at this angle, even if Ortega's chin and Sellers lack of protest at Steve Martin's recent activites are a bit of a giveaway.

I thought they were a pair of lookalikes. One can never tell with Jackson these days. One day, he may very well be revealed to be the Beast, from Krull. And when that happens, only Kenneth Marshall and Alun Armstrong can save us.
Posted by Brian Robinson at 14:40