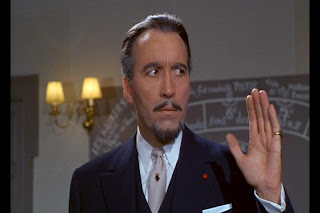 There's something quite comforting about seeing Christopher Lee as a good guy in a Hammer film. The calm authority he exudes in his more villainous roles serves to let you know that someone with real knowledge is in charge. But this also serves to let you know that the challenge about to be faced may be greater. Such is the case in Terence Fisher's The Devil Rides Out, a film I've been hearing friends rattle on about for years and finally watched last night.

It wasn't quite the masterpiece I'd been led to believe it to be, but it is certainly one of the best Hammer films I've seen so far. I think not seeing the film for such a long time after having heard about it, perhaps the title of the film gave me a grander impression of the proceedings. The only time anyone "rides out" is when the Angel of Death appears on a horse, stuck at the mercy of an editor having too much fun with the reels, winding them back and forth. Finding it relying much less on the schlockiness of some of their other films, there is a genuinely unsettling feeling to much of the proceedings, but nowhere near as much as in Night of the Demon, a film which scared the bejesees out of me as a nipper (even if the titular demon does look like it's riding a bike in its wider shots). 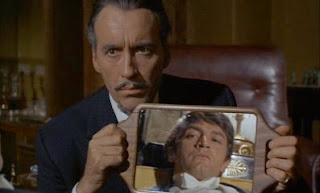 Distracting Patrick Mower from the Emmerdale with a haircut proved disastrous.

There are three moments where some kind of creature shows up, two of which I found particularly effective. The first is where the initial demon appears, manifested as a black man. Not very scary and a touch of the ol' Empire thinking, one might say. I may grant you the latter, in context, but what is really scary is the demon's eyes. Two unnaturally yellow orbs in an otherwise calm and normal face, altering the visage just enough to make the familiar into the horrible - a fine line which, when crossed, can result in pure comedy. 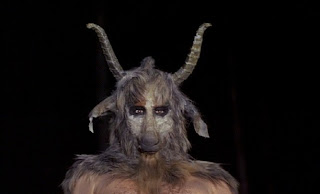 "I've got something in my teeth, haven't I?"
The other is when the Goat of Mendes shows up - a bloke in a mask, to be sure, but done just right so that the actor's eyes show through, giving the beast a real look of life. The fact that Terence Fisher doesn't dwell on showing off the mask and tends to keep the Goat in the background for several shots helps tremendously. It treads a fine line again between stupid and scary and dwelling on it would have made it as scary as grass growing. Maybe I just find odd things scary. It's an eye thing for me. One of the scariest aspects of Giger's Alien is its lack of eyes. 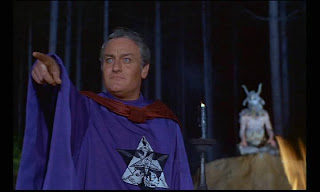 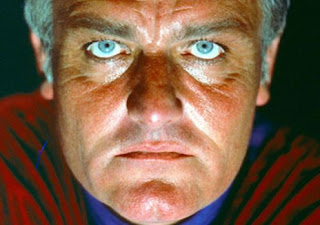 Ah, Charles Gray. One of the best British screen villains ever, in my humble op. His parting words to Lee's niece are wonderfully threatening - "I shall not be back. But something will." Shudder. The unseen is the best cause of fear, yet again.

One problem I had, and I may have to watch the film again, was the Deus ex Machina style ending. Yes, Christopher Lee did say that the incantation could alter time, but something felt missing in this regard. A tad convenient.