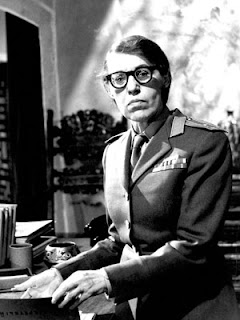 Coke bottles find a use in Soviet Russia.
Cubby Broccoli's centenary has brought us new and beautiful digital prints of the first seven (I think) Bond films and I managed to catch a screening of From Russia, With Love last week. I'd previously seen film prints of Dr No and Goldfinger in the past and I love watching the crackle of the print up there on the screen, but age means deterioration and the print of Dr No snapped mid film (kudos to the projectionist, one Fraser MacDonald, I believe, for repairing it and allowing us to hear Big Tam's rendition of Underneath The Mango Tree...). No such problem with the new print of 'Russia.

Spoilers ahead for 'Russia and Quantum of Solace if you live under a large, irregular mound of solid mineral.

Wow. Seeing Bond on the big screen is, as usual, the only way to really see it and the opportunity to watch one of the early ones is a rare pleasure, especially as clearly as this. The amount you are able to take in visually increases exponentially and the moment where the killer Krilencu tries to escape through Anita Ekberg's embiggened mouth is even more bizarre in a crystal clear print, before the great Pedro Armendariz takes him out (having the villain escape out of Bob Hope's mouth might have worked in a Roger Moore film, but here...erm, nope).

As Ali Kerim Bay, Pedro Armendariz is wonderful in the film, reminding me of Giancarlo Gianinni's Mathis in Daniel Craig's recent outings. He really brings to life a man who clearly enjoys what he does and gives him a real feeling of warmth and friendliness, even when he evades being exploded by giving in to his randy mistress. What a life, Ali Kerim Bay had. As a result, I really felt for him after he met his unseen end on the train. Like everyone in Bond's business, Kerim Bay knew the risks, but that does not mean we should not feel a little at his demise. Once again, Mathis' sad demise in Quantum of Solace springs to mind again. What I find equally tragic is the fact that Armendariz was actually dying himself during the making of the film, something he discovered during the making of the film. He was crippled with cancer in his hips and had to be doubled for some wider walking shots - when he and Bond exit the car at the Gypsy camp, it is obviously not Armendariz. But his limp is pretty visible in the scenes on the train. 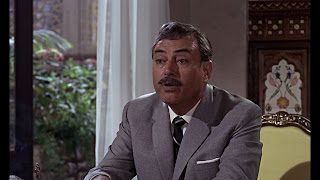 "Who is this Ricardo Montalban of whom you speak?"

There could be the usual argument that the casual racism of the time led to casting a Mexican actor as a Turkish spy ("he's foreign, he'll do") but Armendariz brought a real humanity and sense of honour and refinement to the role which could have been squandered on a lesser actor, which I believe happened many more times later in the Bond series. Tragically, he shot himself after the end of filming but not before he made sure his family received his salary for the film. A superb actor and, by accounts, a real gentleman.

The other standout role is the relentlessly intimidating Robert Shaw as Donald "Red" Grant. He doesn't utter a word onscreen until he assumes the identity of Bond's contact and meets with Bond on the train. The sheer menace he exudes is amazing, especially when he casually puts on his killing gloves in public when accompanying an unsuspecting victim. I heard a story a few years back from a Bond fanatic friend at university that the fight between Bond and Grant on the train, one of cinema's greatest brawls in my humble opinion, was actually real. They were both big guys who liked a drink and a scrap who decided to go for it and not pull their punches. Whether this is true or not, I don't know but there are some punches and kicks which certainly seem to make contact. 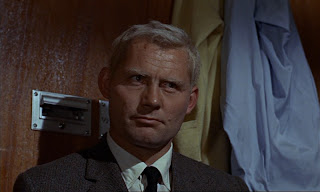 "Yeah, I like High School Musical. So what? Big woop. Wadda fide aboud id?"
The man did silent menace and barely contained physicality better than anyone, I think. Any moment, he could have erupted in an explosion of quick violence. The fact he didn't made him scarier and ramped up any suspense immeasurably. I'm surprised Hitchcock never took advantage of this. Frankly, I found Quint scarier than the shark in Jaws.

Even the other members of the cast are memorable. Lotte Lenya's Rosa Klebb still makes me squirm uncomfortably, her voice setting my teeth on edge and Vladek Shaybel as SPECTRE agent Kronstein is supremely memorable, introduced brilliantly at a chess tournament. His face and performance are so memorable, I have trouble believing him to be a good guy as the doctor in UFO. And even if Daniela Bianchi was dubbed, well...

It still stands up as a great and supremely confident Bond movie; in fact confident enough not have Bond appear for at least the first fifteen minutes of the film. I'm annoyed I didn't know about the other screenings until it was too late. Ah well.
Posted by Brian Robinson at 09:46