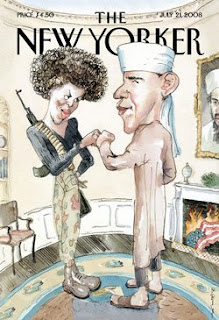 So, this controversy about the Barack Obama cartoon emblazoned on the front cover of the latest New Yorker.

Some are saying that it is offensive. Offensive to the presidential candidate, his wife and their entire cause. It would be easy to say this if the New Yorker were a right wing, conservative magazine

And some would say, including the editorial staff at said magazine, that it is intended as a piece of satire, aimed squarely at the right wing of US politics who have levelled said false charges at Obama. Well, this is easy to see and may well have been the original intention. After all, this was the explanation given by those who placed said image in the world view.

And here lies the real problem. It has also been said, by those who fall into the first camp as described above, that this image plays to the US voters who are, frankly, uninformed (not all of them, just a scary proportion). To me, the observing but interested non-American, this could very well come to mean not just the “uninformed” but the downright uneducated and those biased towards the US right without really knowing what goes on outside the borders of their own towns.

Now, it can be said that the New Yorker caters to a particular taste. Basically, the politically informed and those interested in US politics 365, all 4 years of the term, on the Diplomat side. But I feel that the New Yorker has missed something terribly obvious and important in this day and age (trying to avoid the clichés but…US politics…struggling…to…). This is the age of the internet (yes, another cliché, but stay with me). There is very little in terms of news and contemporary image that is not made available to anyone with a connection. Anyone. Therefore, plastering this image on their front page, in an age where any image is fair game for distribution, they are either asking for trouble or courting controversy deliberately. Personally, I’d go for the latter, but I’m shocked no one has pointed this out (unless they have…). It is perfectly apparent that any image connected to the US presidential race can and will be made available to anyone with the least but of interest. And this includes the 13% of Americans who believe that Barack Obama is in fact a Muslim. Which he is not. They might not be New Yorkers buying Americans, but they have views, however ill-informed in their genesis, which can only be bolstered by this kind of journalistic naïveté. Perhaps if this image had remained within the magazine itself, to illustrate the point they are trying to make, then perhaps this potential subtlety might make their point a little more sharper. They might be preaching to the converted, but at least they wouldn’t be writing the hymn sheet for the worst of the other side.

This just reinforces a belief of mine: many people are stupid – this is easy to forget – and it is all too easy to increase their stupidity at the cost of one’s own gain.