London After Midnight - Found At Last?

Could it be possible? Has it been found at last?

For the uninitiated, London After Midnight is/was/may continue to be the most celebrated and hunted lost film of all time. Made in 1927, it was directed by Todd Browning (Lugosi's Dracula) and starred the great Lon Chaney as a top-hatted vampire stalking the streets of London, wearing one of the most creepy and terrifying faces to ever be captured by a camera. Save for a re-creation made using stills and the odd clip (I believe), the film has been lost, some considering it lost forever. And now, there is a report over at Aint It Cool News that a print may indeed finally have been found, only to be placed back on a shelf and then moved by the owners. The story links to another website where the guy who says he found the film has made everything as clear as he can at his site.

Now, the most obvious thing to do is, at the very least, raise an eyebrow and call BS on the whole thing, but this seems very credible to me - perhaps the fact that I want to believe it influences my reaction, but I smell no fish here. Well, no strong, oily ones at any rate. The most immediate questions springing to mind are why this guy didn't come out and say he found the film back when he did. While he was obligated to place the film back with it's owners, he should at least have said something at the time. Consequently, the print has been moved to an unknown location, but it can't be that hard to find. I hope they find this and do it the justice it deserves. 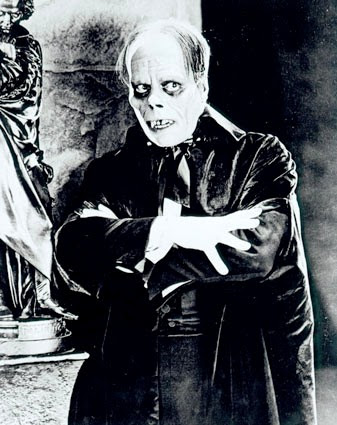 Lon Chaney was a cracker. I've seen several of his classics; my wife an I saw The Phantom of the Opera on the big screen a few years back and when he did his big turn and revealed his disfigured face for the first time, my wife (who already knew what he looked liked) grabbed my arm and exclaimed "Fucking hell!", which is surprising as she is very definitely a lady and swears rarely. That's the power his make up had. Or not, as he did not wear make up, or prosthetics at least. He would insert metal hooks and loops to pull at his face, widening his eyes and pushing his nose to create some of the strangest and horrifying visages in film which are still as effective today. The League of Gentlemen even site Chaney as an influence, avoiding as much prosthetics as possible for their characters - Edward and Tubbs' upturned noses are done with tape! I don;t know how far Chaney went with this approach; some of his characters must have had some form of prosthetic, like morticians wax or nose putty, but the eyes and noses were all his own.
I hope this is true. I really, really do.
Posted by Brian Robinson at 11:58