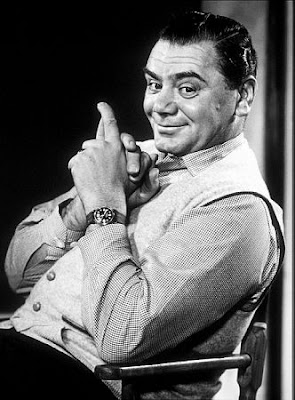 Just like Eric Sykes, who we also lost this past week, Ernest Borgnine was one of those guys who never seemed to stop.

I loved him. A really great character actor. A lot of folks knew him as a villain from movies like From Here to Eternity, Bad Day at Black Rock and Johnny Guitar, but seeing as I grew up in the late 70's and 80's, I knew him first from movies like The Poseidon Adventure, Flight of the Phoenix, Escape from New York and The Black Hole and on TV in Airwolf.

And then I saw Marty.

To my young mind, what a revelation.

He seemed a lovely, genial man who was not afraid to poke fun at himself on The Simpsons or even on live television when whispering about how had achieved such longevity.

He kept working up until recently and was even known to young kids as the voice of Mermaid Man on Spongebob Squarepants. Just a cool, hard working actor who seemed to really love what he did.

The man was a ubiquitous element to my viewing as a youngster and even afterwards. 96 is a great age.

Thank you and rest in peace, sir.
Posted by Brian Robinson at 22:41