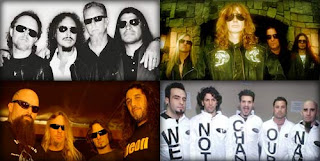 I usually prefer to blog about film related stuff but I have to mention last night's experience in a cinema. And it was in no way connected to the movies.

The Sonisphere Rock Festival, presently doing the rounds in Europe and soon to hit UK shores, has just included the best line up a stoopid metalhead such as myself would remove any limb of preference to get a swatch at - The Big Four of Thrash Metal, namely Metallica, Megadeth, Slayer and Anthrax all on the same bill.

Awesome doesn't quite cover this one.

Reducing much of the awesomeness of this is the fact that this line up seems to be exclusive to Europe and will not be hitting the UK next month. In fact, they're not even doing it in the US.

Rebuilding a fair bit of the awesomeness was the forward thinking of the organisers to broadcast the gig live (well, almost live. No 20 minute gaps between sets) in cinemas all around the world. So I went with my good mate Chris, a fellow veteran of the Edinburgh Metal scene, circa late 80's/early 90's. Oh, how me miss Madisons and The Mission. And damn, did we have a good time? Hell yeah. Someone had a decibel meter on an iPhone. 98dBs. Oh yes. In a cinema. Full of metal heads (with a good age range from teens to 40's by the look of it.).

Anthrax came on first and were just amazing, not losing an iota of their energy after all this time. Another major plus was that Joey Belladonna, lead singer through what many believe to be Anthrax's best years and albums, had recently rejoined. I think this was his first gig with them and he just kicked ass in a fucking superb way. Even during the "Wardance" bit from Indians, he rushed out onto the stage with a native American head-dress on, as though no time had passed since Among the Living had come out. They just look like they have so much fun and I want to see them live more than ever now.

Megadeth. I like the music but they're a bit dull onstage. At least Dave Ellefson was present, so he'd obviously patched things up with the mercurial Dave Mustaine. They sounded fucking bang on but, as I say, not a huge amount to see live.

Slayer. The band I'm least acquainted with but still know their most famous songs. Absolutely brutal. Tom Araya provided all the smiles while Jeff Hanneman and Kerry King did their thing looking as mean as possible. Kerry King's solos were like being confronted by a blast furnace and the cinema audience went absolutely ape-shit when Reign in Blood started.

Metallica. What else is there to say about this band? Amazing live and a blistering show. Full on pyros during the opening bars of One. They knew how to entertain the audience and every song bar one was a classic from their first five albums, the exception being Cyanide from Death Magnetic, which I reckon is a return to form for them (let's not mention Load or Reload).

A decent couple of tribute pieces to the late Ronnie James Dio as well, who was due to perform before he took the ultimate Holy Dive recently. Loads of Dio metal hand signs went up in the air.

And then James Hetfield did what I prayed would happen. Brought the other bands out on stage, with the exception of Slayer's Hanneman and King (enough with the feuds, guys) and Metallica, Anthrax, Megadeth and half of Slayer proceeded to jump into Am I Evil.

I've never heard people make that kind of noise in a cinema before. Quite a sight to see metallers head banging and jumping for joy in perfect silhouette against the screen.

Just about all of the playlists read like greatest hits compliations buyt that's why we were there. A simply fucking awesome night, save for the fact I was sober and driving. Actually, me, beer, metal. That would likely have been a messy affair, possibly reducing today as a write-off.

And now, back our (ir)regularly scheduled witterings...
Posted by Brian Robinson at 22:30