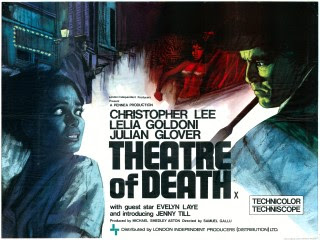 I think we bought this years ago from a charity shop under the mistaken belief that it might have been the vastly superior Theatre of Blood, starring good old Vincent Price. It's been sitting on a shelf for a very long time and, well, should it have stayed there? I certainly didn't hate it but it doesn't seem all that sure of itself. And it commits the crime of wasting Christopher Lee.

Lee's Phillipe Darvas runs the Théâtre de la Mort in Paris, kind of an updated (for the 60s) take on the Grand Guiniol where the middle classes would flock to see various sketches that portrayed the apparently realistic deaths of those onstage in a variety of highly grisly ways. A bit like an Alice Cooper gig. An ongoing spate of murders is occuring at the same time and Darvas' arrogance and cruelty to his actors is earning him a reputation that places him under suspicion as the serial killer (a phrase never uttered in the film). That is, until he himself goes missing. All of this is delivered through the sighs of Leila Goldoni's actress, Dani, and her professionally convenient policeman boyfriend, Charles, played by Julian Glover. At the centre of all of this is new member of the troupe, Nicole (Jenny Till) who spends part of the film hypnotised by Lee's maniacal director and is gradually brought out of it by Dani and Charles. But her enigmatic character doesn't end there, even though her final reveal is kind of pointless as it's hard to care about her. In fact it's hard to care about anyone in this film.

Lee is his usual grand self but disappears halfway through, his murder only signified by a couple of lovers on the Sienne who find his grey and dead hand/arm which does not seem to be attached to anything; whether or not this is deliberate is up for debate. It seems that Lee's complete absence from the second half of the film indicates a certain frugality of budget; they had him for a small amount of time and couldn't afford him anymore?

Goldoni's character proves effective enough at expressing a reasonable fear of being harmed onstage but her character's history seems shoehorned in so Lee can shout at her and the murderer can frame her very late in the game. Glover's police officer is at once charming and suspicious of everyone but there come several moments where director Samuel Gallu shoots him with his own suspicion of him in mind. I was convinced at one point that he was in the frame and yet nothing narratively was done there. Even his superior, Ivor Dean, famous as the long suffering lawman who had to deal with Roger Moore's Simon Templar and Jeff Randall in Randall & Hopkirk (Deceased), has a moment where the audience might even suspect him. And yet nothing is done with these moments, depriving the film of any sense of paranoia on the part of the Goldoni. 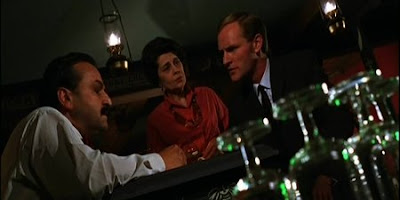 Gallu also has a bit of a predilection for framing characters to the extreme side of the frame, at times warranted at other times not, and for shooting from low angles. Fair enough to make the tall Lee seem even more imposing and interesting during a Tarot reading where the cards, on a glass table, seem to float in the air providing the audience with a spot of dramatic irony, particularly regarding one character. At other times, the low angles sprinkle in here and there for good or ill. It's all a bit meh, considering the story revolves around Grand Guignol and yet chooses to spend more time on the piddling love story.

At least the climax occurs around a performance at the Theatre de la Morte, but the villain's end, set up earlier on, appears ot be an accident, a scene pushed forward by the tense diegetic drum beat of the performance, even if it does involve some rather racially ropey voodoo dancing, with once performer revealed to have been blacked up. The flippance with which it does this is kind of amusing and amazing at the same time.

It;s a bit of a disappointment and one that wastes Lee. At least there as a scene for this child of the 80s where two Bond villians/Star Wars villains got to share the screen. Scaramanga would have made mincemeat of Aristotle Krystatos.
Posted by Brian Robinson at 21:28