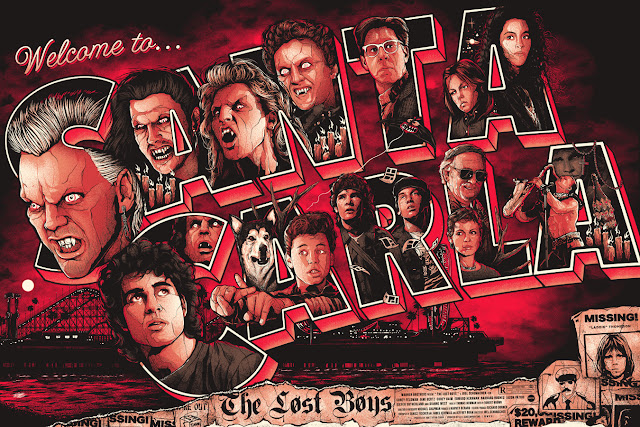 I never saw The Lost Boys when it come out in UK cinemas in 1987. I was 14 but looked 10 years old so there was no chance I was sneaking into a cert 15 film. And yet, when it came on UK TVs on the Christmas of 1990 I think it was the right time for me to see it. I was too busy with Joe Dante, Krull's re-release (bite me) and Spielberg's Amblin films which seemed to be on regularly at the ABC on Lothian Road. Ah, Saturdays...

I was a fragile child and would likely have been put off by some of The Lost Boys - I just didn't connect with teenagers when I was one. By 1990 I was in my final year of high school and, after years of bullying and ostracism, had finally learned precisely how to tell the world to "fuck off" and I was finally getting into music that wasn't movie soundtracks. Frowns were the order of the day ("Smile, Brian!" "Fuck off.") and the time was right for me to appreciate Joel Schumacher's tramp-chic take on vampires and JM Barrie. Not literally Barrie, per se, but I believe the original idea had been, "What if the Lost Boys in Peter Pan never grew up because they were vampires?" 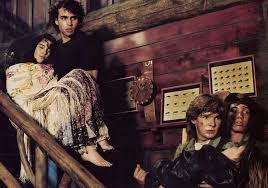 I said before that this season of blogs is about horror movies I've not watched before or at least not watched for a long time. We figured out it had been a lot longer than I thought since I last watched The Lost Boys, although I'm sure some late night drinking session has ended up in the Banshee Labyrinth, in Edinburgh's Old Town, watching it in the cinema there. And yet, I can still insta-quote the film as irritatingly as I could back in the 90s. It's all still there: the rice maggots, motorbikes in the fog, the Frog brothers and their comatose parents, Corey Haim's relentless cheeriness, that reveal, the "Attack of Eddie Munster" and Barnard Hughes final line (my teen self couldn;t help thinking, !Mr Merlin!" upon seeing him. It's probably me and my age but I hasn't aged as badly as it might have, with the obvious exception of Corey Haim's wardrobe, Edward Herrman's jackets and that ridiculous oiled up muscle dude singing with his sax on the beach which surely must rate as one of the most 80s things ever put to film. Crazy sax dude aside, the soundtrack still seems relatively fresh (OK, it's my age); Echo and the Bunnymen's cover of People are Strange (produced by Ray Mazarek, no less) hits exactly the right note. But the less said about Roger Daltry's cover of Don't Let the Sun Go Down On Me the better.

The Lost Boys isn't particularly scary, but I will argue that since it is about vampires and people are killed that it is indeed a horror film; the scene at the beach bonfire where Keifer Sutherland's David reveals the gang's true nature to Jason Patric's Michael is an explosion of quickly cut vampire mayhem, with arms ripped off, bald heads bitten into and corpses sizzling on a fire, the aftermath mixing Michael's conflicted revulsion and David's gluttonous appetite clearly sated. Sutherland wipes away what could be a bit of food from the side of his face as though he's just finished a pie eating contest. And Schumacher and his DP Michael Chapman know exactly how to light Sutherland's baby-faced features, giving his appearance real menace and an otherworldy quality. Sutherland's casting is superb. Much of the other casting revolves around the teen idols of the time or pretty faces, alas, with the exception of the Frog brothers. But one gripe I do have with the film is that there doesn't seem to be a main character. Arguably, it's Michael but its hard to care about him, especially when his brother shows him up so spectacularly. Herrmann's Max is suitably sympathising which gives more power to his reveal at the end. And yet, is that what everyting's been about? His speech about family doesn't hold that much water when the rest of his scenes with the gang have been antagonistic. 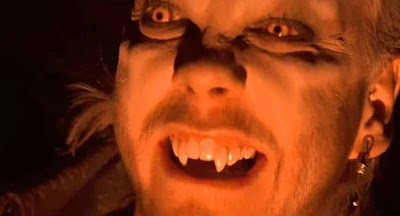 The film's imagery homages many other movies, notably Psycho with it's predilction for taxidermy with sprinlings of Mad Max through the denizens of Santa Carla and their home made couture. There is a feel of twisted nature to it through the use of gnarled wood in much of the production design, notably, Barnard Hughes home and the vampires' lair. Any of the plastic artifice so synonymous with the 80s is reserved for Max's video store, which the film doesn't seem too keen to spoend a lot of time, instead opting for a grubby nostalgia for times past on the boardwalk. The vampires' victims are shot from above, often very high above, giving us a flying vampires-eye-view of their prey without going to the expense of sticking the actors unconvicingly on wires, something kept for the final showdown between David and Michael among the rafters of his grandpa's home, all kept in shadow and quick cut close ups, a nice bit of cineman to mask any budget deficiencies. I prefer it that approach - nowadays, it's all "easy" and I feel so much is lost of any impressionism cinema can still pull off - it's an emotional experience and we don't necessarily perceive the world in grand, open shots when action is called for, even though some filmmakers take quick cut, close up action way too far these days (oh shit, I'm a grumpy old guy!). Schumacher knew what he was doing with this movie, full of knowing winks without ruining the artifice. The image of a floating boy at the window from Salem's Lot is nicely homaged through one of the film's most famous scenes and endlessly quotable lines that would have been manna from heaven for the film's marketing people and was ideal for its audience: 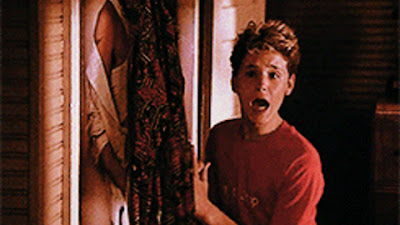 "My own brother! A goddamned, shitsucking vampire! Well, you wait til mom finds out, buddy!"
Posted by Brian Robinson at 11:35