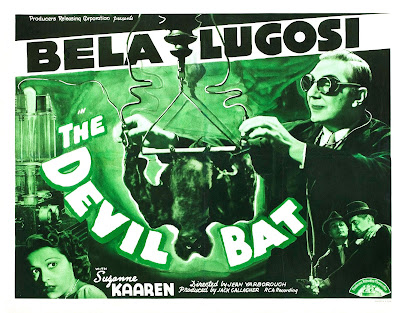 One of the things I love about the great Bela Lugosi was his commitment to a project, on screen at any rate. He appeared in some of the greatest classic horror films ever made and he also appeared in the rock bottom worst of them. And yet in those awful titles he still remained the most enthusiastic presence on the screen. He had a sense of power that could come and go but his charisma and love of acting seemed always there. He just gave it his all.

This is by no means among Lugosi's worst movies, but it's certainly not up there with Dracula or White Zombie.

The Devil Bat (1940) has Lugosi as a mad scientist who keeps his raving mostly to himself (and his bats) but presents that effortless Lugosi charm to the outside world, both to fool his would-be victims and those investigating the giant bat murder spree (more on that in a moment) and also just as an aspect of the character’s natural personality. If he wasn’t sending his mutated creatures out into the night to do his murderous bidding, he seems like a rather affable chap. It’s difficult for the first half of the picture to root against him 100%.

It’s a bit odd seeing Bela Lugosi in a film about “devil bats” and there be no vampirism. One wonders how cheesed off horror fans might have been on watching the film. 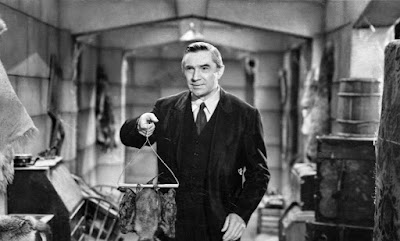 The Devil Bat was one of the Poverty Row horrors being churned out in an attempt to cash in on the success that Universal and RKO were having with their own creepy titles. So many complain about Hollywood churning out sequels and jumping on the genre of the year but it’s really always been this way. With the success of Frankenstein and Dracula it was only logical that Universal’s competitors would jump on the band wagon but, it seems, most of them were the smaller, less well financed outfits (hence the  name Poverty Row) that were most attracted to doing the horror thing as well. Enter Producers Releasing Corporation (PRC) who gave it their own go with director Jean Yarborough.

It’s a mixed bag and doesn’t really feel like a horror to me. Of course there are the horror elements, as Lugosi’s revenge driven Dr Carruthers mutates bats into slightly larger monstrosities (fruit bats…) and trains them to kill whomever is wearing his specially formulates shaving lotion. Once he realises that his financial backers have stiffed him (although they’re open about the fact that he took their cash without wanting a percentage. The fool!), he decides to take them out, along with their playboy/girl rich kids. So, we have the mad scientist, his lab and his creepy experimental monsters. Now enters our hero, ace reporter Johnny Layton (Dave O’Brien) and his frankly rubbish shutterbug sidekick, “One-Shot” McGuire (Donald Kerr), and the tone of the thing alters. These guys were clearly trying to operate as a comedy double act here (and in some other films) and they’re no Abbott & Costello (who Yarborough would direct in later years). O’Brien comes across as a typical low-budget romantic lead and with all of the lack of effort that incurs. This is your typical reporter with a pistol, ready to step in and save the rich heroine he’s just met from any crazy villain. The best that could be said is that, early on, he comes across as Gregory Peck’s slightly rubbish forgotten brother. Kerr’s photographer is nothing but lame comic relief, an unending parade of crappy one-liners (most aimed at the attractive maid character – he’s going to marry her) that, combined with his earnest face, gave me the impression that he might snap from despair and fucking murder the lot of them. Except Lugosi, of course. These guys appear and all of a sudden the thing feels more comedic and even serial based; I expected some cliff-hangers. It had a feeling more of King of the Rocket Men than Dracula.

Why does the seemingly amiable Carruthers make giant bats to kill people before he’s given his reason to start offing his enemies?

Production design is basic. Lugosi’s lab (both secret and not-very-secret areas) looks a bit threadbare, with the usual chemistry set paraphernalia mixed with walls that look painted to appear like stone, and his bats consist mostly of inert bat dummies hung upside down intercut with close up shots of fruit bats that look like they’re chewing on particularly sticky toffees in what looks to be an attempt to make them look scary (I got a bit concerned about their welfare as they seem to have their wings stretched out by human hand). Said Devil Bats, as described in hotshot Layton’s newspaper articles and One-Shot’s phony photos (a plot point, I tells ya!) launch out of Lugosi’s lab window into the night, literally screaming down wires at their intended victims, surely inspiring a young Edward D. Wood Jr.

I’m being harsh. It’s all enjoyable silliness meant to amuse of thrill an audience trying not to pay attention to what was going on in Europe at the time. Most chances to see Lugosi in action are worth snapping up. 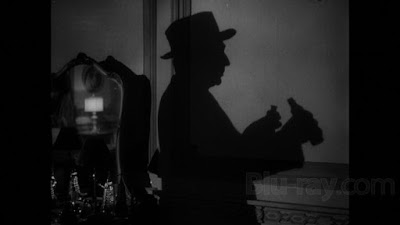 There is actually one moment that seems to try and evoke a bit of horror through some nice silhouetting of Lugosi as he prepares to do his worst towardsd the end of the film. It;s a shame the rest of the film isn't given more thought like this, insetad chossing to focus on the shenanigans of Layton and One-Shot, as though someone was thinking, "Hey, got an idea for an series of flicks with these newpaper chumps!"
Amusing trivia: our journalistic hero’s boss, who fires him and One-Shot at least once in the film, is played by the wrongfully forgotten Arthur Q. Bryan, whose gruff voice here is not all that recognisable from his most famous role of Elmer Fudd. Mel Blanc is a bit of a hero of mine but I can never really forgive him for insisting on taking almost all the credit for the voices of Warner Bros. cartoon legends in Loony Tunes and Merrie Melodies. After Bryan died in 1959, the character of Fudd* was retired and not resurrected until over a decade later by a noticeably vocally different Blanc.

I feel a future blog about Arthur Q. Bryan is looking on the horizon.

*Scots readers are giggling at this phrase as you read this.