Crying the Wolf Guy Must Die 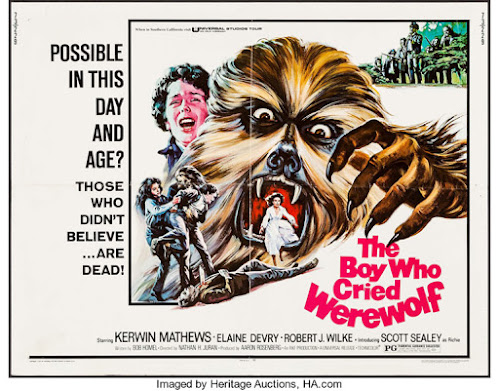 The Boy Who Cried Werewolf (1973) is another one I’d wanted to see since I was a kid. A friend had a book of movies monsters featuring this film and the photos of this werewolf scared the hell out of me, all wild hair and huge eyes. Time has cooled my fear, as this film is aimed less at a horror audience and seems a bit more for kids as well as their folks, and the werewolf is a bit silly. The first film I saw in a cinema was The Seventh Voyage of Sinbad (1958), and this film brings back two of the main players from that film, director Nathan Juran and Sinbad himself, Kerwin Matthews. Matthews plays a recently divorced father, Robert Bridgestone, who takes his doting (and frankly irritating) son, Richie, for a weekend at their cabin in the woods. No sooner have they arrived and strolling through the woods, then they are attacked by a werewolf who has been stalking them since they drove up the road – no sense of anticipation here, the werewolf is in display form the first moment, and not all that scary, aside from some interesting guttural growls. Said werewolf is dispatched (with relative ease, it must be said) but not before dad has been bitten, and when dad starts to turn, Richie starts to suspect but, of course, no one believes him. Until it’s all too late. 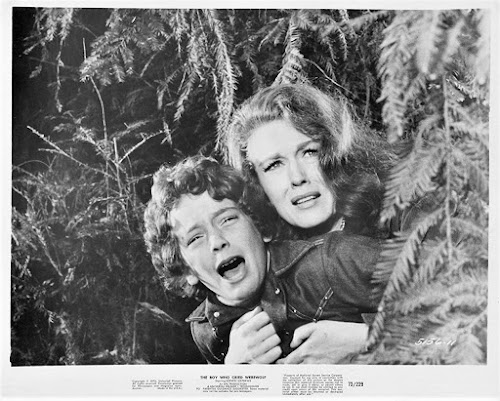 Visually, it all feels a bit TV movie of the week, but there’s some interesting stuff going on here, with a boy’s growing fear of his father after a divorce, and an identity crisis for 1970s middle aged divorced men. There are some ropey gender politics going on but those are a product of the time this was made. The werewolf make-up seems less actual make-up and more of a mask, allowing for a more pronounced snout, as opposed to the blackened, dog nose of previous werewolves. I kind of liked that here, even of the snout seems to be open a good deal of the time, precluding much expression, but that comes from Kerwin Matthews’ loud and crazy eyes. It's a memorable werewolf for me. A sub plot involving Christian hippies is relatively amusing, their buffoonish leader played by the screenwriter, Bob Homel, but a buried head in Matthews' cabin is a Chekhov’s Gun which fails to go off.

OK, I admit it; The Seventh Voyage of Sinbad was technically the second film I veer saw in a cinema, being part of a double bill with The Bugs Bunny Road Runner Movie (1979). Chuck Jones and Ray Harryhausen was a decent start for me.

The Beast Must Die (1974) is the film which sparked this whole idea of watching werewolf films during October. The last of Amicus’ horror films, and not an anthology film (something they excelled at), it’s a grand and pompous affair, starring Calvin Lockhart as a millionaire big game hunter, Tom Newcliffe, who seeks the ultimate prize – to hunt down and kill a werewolf. To accomplish this, he has brought a selection of the great and the good to his mansion, all selected due to their proximity to gruesome murders which could be attributed to werewolves, and he’s convinced one of his guests is one. He makes to secret of this and even becomes obsessed with one particular guest, Paul Foote, played by Tom Chadbon, who should be familiar to fans of classic Doctor Who as Duggan in the classic story, City of Death, looking like a drunk Rick Wakeman. Michael Gambon also makes an early cinematic appearance as a classical pianist. 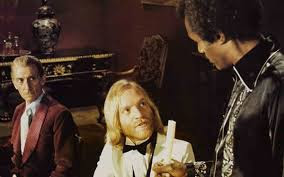 The Agatha Christie roots are obvious and it kind of works, even if it all gets a little rushed; this is no Death on the Nile. Newcliffe is basically a rich maniac who has pulled all of these people together to use as bait. As expected, some of the guests are picked off, leading to a grand finale, but not before innocent people meet with grisly deaths along the way. But there could be something to be said for casting a black actor who has brought a lot of very white English/European types to his mansion to his amusement. The film doesn't appear too bothered with much of this, even if his wife, played by African American actress Marlene Clark, is dubbed by white Scottish/US singer Annie Ross. Annie Ross will forever be ingrained in the terrified minds of 80s kids as the woman who gets turned into a robot in Superman III (1983). And being Jimmy Logan’s sister. Ross’ voice is very distinctive, and the use of her in the dubbing was just distracting. The presence of they call a "werewolf break", where the filmmakers stop everything to ask the audience who they think the werwolf is is incredibly distracting, apparently producer Milton Subotsky''s idea, but it doe slend itself to the evening dinner part feel the film seems to be aiming for, alongside the deaths and ripped out throats. 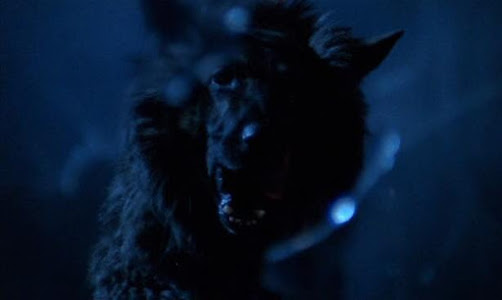 I had a bit of an issue where the werewolf itself, played by a big black dog (no anthropomorphic Wolf Man here, folks) takes on Lockhart’s own dog and the two fight. It looks like the filmmakers did indeed encourage two dogs to actually fight each other and that’s an unacceptable line crossed for me. As stated, the werewolf itself is just a big black dog, even though the poster for the film clearly shows a full-on Wolf Man as the monster – this image being “borrowed” from The Boy Who Cried Werewolf, quite the cheat indeed. Anton Diffring and Peter Cushing emerge with most of their dignity intact, if not one of their throats, while Charles Grey seems mercifully ignored. The film begins with an interesting fake out regarding the main character and ends with a supposedly noble sacrifice, but the hubris and arrogance of the main character seems forgotten by this moment. Over-acted and rather full or itself, with some brilliant actors a bit wasted. The score is that unique UK 70s jazzy funk thing I remember hearing on The Professionals and The Return of the Saint in early childhood, lending a sense of cool to the daft proceedings.

Wolf Guy - Enraged Lycanthrope (1975) is a Japanese wolf man tale starring Sonny Chiba as Akira Inugami, the last survivor of a wolf clan, now almost exterminated by locals. Based on a manga and actually a sequel to Ōkami no Monshō (1973), Chiba’s werewolf doesn’t assume the form of a wolf but does gain special feral powers when the moon is rising, his powers peaking when the moon is full, and weakneeing during a new moon. Unlike Lawrence Talbot, this werewolf actually looks forward to a full moon, so he can use his abilities for good, being kind of a superhero – I think his actual job is journalism, but I don’t think it’s explicitly stated in the film. But he's played by Sonny Chiba and can therefore kick the living shit out of people, so there's that. He's also bullet-proof at the peak of his powers. A transfusion of his blood to one of the villians does result in a bit of a more wild appearance, but I suspect that's simply because he's a bad guy and this is that kind of film.

Coming across a crazed man who claims a tiger-woman is coming for him, the poor guy is ripped to shreds by an invisible force right before Inugami’s eyes. He investigates and discovers that the victim is a member of a pop group who gang raped a young woman, Miki, at the behest of a business magnate who didn’t want his son to marry her. Her rage now manifests in this invisible tiger and all she hates are doomed to die horribly. Chiba wants to help her and lift her from her life of abuse and drug addiction, but other powers are interested in both of them. A shadowy organisation, possibly the government, abduct them both. The emotionally fragile Miki has no choice but Chiba resists, leading to a gruesome scene where he is surgically cut open, while awake, and his intestines are left exposed. This is a nasty scene, featuring real surgical footage but the image is turned negative to avoid too much audience vomit. This also leads to a fantastic scene where, as the full moon appears, he uses his powers to draw his horribly exposed guts back into his body, sealing the open wound. It’s bonkers.

Much of the film is, indeed, bonkers, with every woman with a speaking role throwing themselves at Chiba almost the moment they meet him, and a wonderfully funny moment where a thug is shot in the head, screams in the most over the top manner, and falls down a cliff, crap dummy used to full comedic effect. This might make me sound sick, but it is honestly hilarious. Tt seems to jump between genres at will, from crime drama to film noir to action spy caper with the greatest of ease. I had a top time watching Wolf Guy and it’s a shame no more were made.